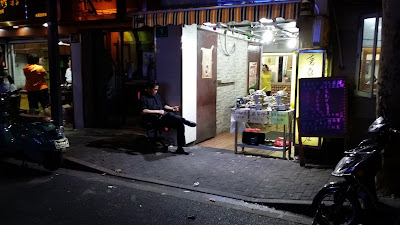 Shanghai is a snarly beast of a city, a monstrous Jabberwock that snaps and snarls: "The jaws that bite, the claws that catch." People are rushed, and stressed, and almost buckling under the pressure, which makes every negotiation - with ticket sellers at the train station, with food vendors, with taxi drivers - a little fraught. If you thought New Yorkers were rude, then think again! But then there are the unexpected kindnesses: a man who gives you a seat on the metro, a smile from a young man who held his umbrella over me at the traffic lights, or a quick chat with the grandmother of a red-cheeked baby. Over many visits I have come rather to love it. People in Beijing say, "Óh Shanghai - it's all about money in Shanghai!" And western friends in Beijing say, "But it doesn't feel like China, it could be anywhere!" Um, no. It couldn't. Let me give you a few reasons:

I walked back to my hotel this evening in the gathering dusk and saw, just behind the big name global brands of Huaihai Road (Prada, Versace, Dolce & Gabbana, Sephora, Starbucks blah blah blah), another world. Barbers and tailors packed up their footpath businesses. A lady with a typically Shanghai frizzy perm mended clothing at an ancient Singer treadle sewing machine on the footpath. A woman fed her baby on a chair set outside the family's small restaurant. Families ate at tables on the road, men (yes, some in pyjamas) lounged smoking in the laneways that characterise old Shanghai architecture, and groups played cards. Tiny children in the traditional split pants ran around shrieking like crazy things. A woman in a frilly nightdress (and high-heeled shoes) directed traffic around her husband's car, laughing. Washing still hung from all the powerlines. Every tiny traditional Shanghai eating place was full. The staff of one restaurant crouched on the footpath, unpacking crates of fish, eggs and vegetables. 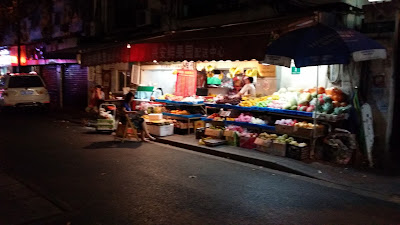 Fuxing Park at 6.30 in the morning is a furious hive of activity. Many groups of elderly people practise Qi Gong, or engage in the weirdly frantic exercising that involves a lot of self-slapping. People play vigorous games of shuttlecock and there are already many loud games of cards. Some have brought their jars of tea, and snacks, set out on the grass and the benches. Grannies are dancing (very, very badly.) A man sings opera in the rotunda, and nearby three men practise the saxophone. Women walk babies in prams. Plenty of people are jogging - well, sort of, as many are wearing street shoes and doing a kind of energetic shuffle. Men walk with very loud transistor radios in their "man bags" playing Chinese music. Other men have brought their songbirds and hung their tiny bamboo cages from the branches of trees. A group of women exercise right underneath the statue of Marx and Engels. And three women practise ballroom dancing on their own - getting ready for later.

The contrasts, as always in China, are great. You see young men with the sharpest suits, haircuts and eyes. Beautiful willowy women in floaty dresses and the highest of heels carry designer handbags. They are jostled by countryside women with red cheeks, sparkly T-shirts and socks with high-heels, and men with brown seamed faces wearing dusty suit coats and down at heel shoes. I had lunch with an artist at a tiny, spotlessly clean noodle restaurant run by Uighers from Xinjiang Province, who were eating their family meal but rushed to prepare delicious noodles with egg and tomato. In the same city western and Chinese customers are paying ridiculous prices to eat not very good food with the obligatory western brand names -Wolfgang Puck has a lot to answer for, in my opinion. Chinese cities juxtapose the refined and the tawdry, the handmade and the mass-produced, the old and the new, in a dizzying high/low mash-up.

In homage to Yang Fudong and "Eight Intellectuals in a Bamboo Forest" (I saw the Yang Fudong exhibition at the Yuz Museum, one of the numerous new private museums in China), here are my "Eight Cyclists in a Concrete Jungle":

Eight Things Seen on Motorcycles and Bicycles in Shanghai 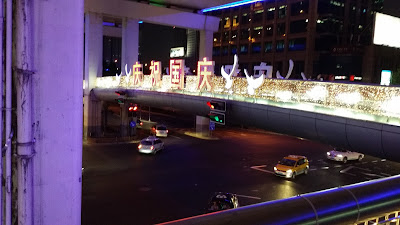 In all the chaos and madness of Shanghai traffic - and it is mad, on my taxi ride to catch a train to Hangzhou I truly thought my last hour had come, as the driver chose to zigzag recklessly between lanes on the elevated freeway - older people sail serenely through on upright bicycles. There is none of this lycra-wearing bullshit here, and nobody appears to think they are in the Tour de France, which does make me wonder what on earth is going on with Australian cycle enthusiasts. Road rules, however, are entirely theoretical, and you really have to keep your wits about you if you are not to be flattened by the motorcycles darting through the red lights.

English phrases are very fashionable although not always comprehensible: the Shanghai Lady Department Store offers me the opportunity to be "Édvonced" - the height of modernity no doubt. And I could have bought a T-shirt that said, "A smile is the only virus that does not destroy the world." Um, what? A small shop selling trinkets and assorted junk near my hotel is called, mysteriously, "My Boxlnn."

About to leave for Beijing, I find myself regretful. Shanghai has grown on me slowly ("man man de'' "慢慢地") over the last five years. And here, in early Autumn, it is particularly beautiful, with the tree-lined streets of the French Concession achingly gorgeous. After a week in China, I am just becoming verbal. A friend once said to me that every time she arrives in China she feels for the first week as if her tongue has been cut out. This alarming metaphor describes my feelings exactly. For the first few days I am almost unable to speak - I can form sentences in Chinese in my head but cannot seem to make them emerge from my mouth. As the days go on I gradually, gradually begin to regain the power of speech, but even after a week I know that I am jumbling the word order and mangling the grammar. "Can you or can you not me a taxi call?" I ask. " That I do not want!" I declare. "Please a coffee to me bring." "Left or right I turn should?" Even as the words exit my mouth I know what I should have said, but it seems I am doomed to communicate in pidgin.

Next week in Beijing, I return to my language school for an intensive three weeks of class, so we shall see if that improves my fluency and my confidence. This week, however, I have interviewed seven extraordinary artists in Shanghai and Hangzhou, including Xu Zhen at his MadeIn Corporation, Lu Xinjian, Yang Yongliang, and Hu Jieming, among others. More of this in a later post. In the meantime, if further proof were needed that Shanghai is not just another global megacity like every other, there is the restaurant called 'More Than Toilet', where diners are seated on toilets and eat from toilet-shaped plates, part of a chain with branches in Taiwan and Hong Kong. Also, the cigarette counter of the Shanghai Lady Department Store is next to the Maternity Wear department. I rest my case.

Posted by An Art Teacher in China at 7:42 AM