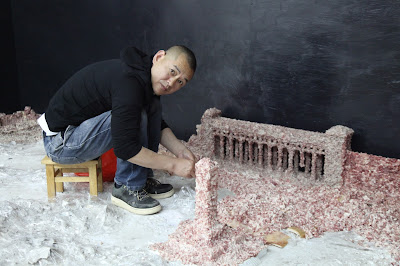 With a certain significant date earlier this week and a new exhibition just opened at Sydney's Art Atrium gallery, it seemed timely to re-post my profile and video interview with Chinese/Australian artist Guo Jian, published in The Art Life just before I went to China in April. He is brave, resolute, astonishingly outspoken, and continues to make interesting work and push the boundaries of practice:

In the late 1950s, Mao Zedong called upon artists to combine ‘revolutionary realism with revolutionary romanticism’ in order that art should serve the people. In a very different 21st century context, by recording the impacts of globalisation, industrialisation and urbanisation on Chinese society, the current work of Chinese/Australian artist Guo Jian comments fearlessly on the ills of his — and our —society. In several conversations over the last year, and an interview filmed for White Rabbit Collection, he has spoken to me about his life and work.
His dramatic life story would make a great movie script. In 1979, as a seventeen-year old small town boy in poverty-stricken Guizhou Province, keen for adventure and escape from what seemed a dreary future, Guo Jian enlisted in the People’s Liberation Army. His romantic illusions about becoming a revolutionary hero — and his hopes for a secure future as an army-trained artist — were very quickly shattered. Far from home in a grim military camp during the tense build-up of the Sino-Vietnamese war, the way that groups of lonely young men could be manipulated into a state of hysterical blood-lust struck him with horror. 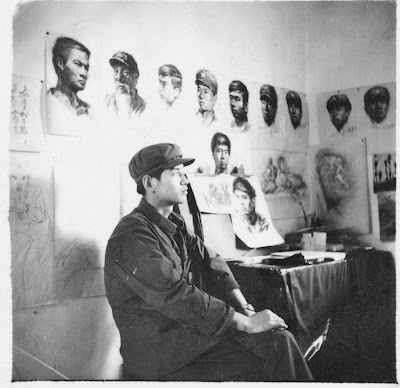 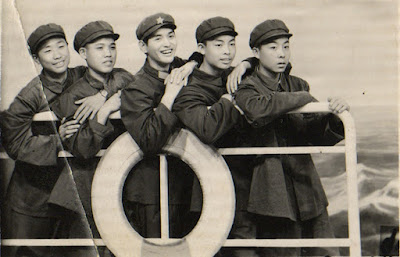 His experiences of the tumultuous events of China’s recent history—his childhood during the upheavals of the Cultural Revolution, military service, and first-hand experience of the events of 1989—influenced his autobiographical approach to painting. He became known for savagely satirical Pop-inspired realist works: populated by ‘Entertainment Soldiers’, the seductive dancers and singers deployed to motivate and mollify the troops, his paintings examine the sexualisation of propaganda.
Returning to his home town after his time in the army, Guo Jian worked as a propaganda officer: he was given a camera and charged with taking photographs of model workers in state-owned factories and workplaces. Bored and increasingly cynical, he seized the opportunity to apply for art school in Beijing; from thousands of ‘ethnic minority’ applicants — Guo is a member of the Boyi minority —only three from Guizhou were accepted. In 1985 Guo Jian arrived in the capital to take his place at the ‘Minzu’ National Minorities University. It was a time of great change and excitement: after the repression of the Cultural Revolution, artists were abandoning Soviet-style socialist realism and seeking new, experimental visual languages. They organised exhibitions and conferences, staged events and underground exhibitions, and wrote manifestos. The student movement for democracy appeared to herald the birth of a more open society, but this period of optimism ended abruptly in June 1989. Together with so many other artists, writers, teachers, students and ordinary citizens, Guo Jian watched as the tanks rolled into Beijing, manned by fearful young recruits from the far provinces, boys just like he had been ten years earlier.
Guo Jian is a compelling storyteller, and his tales of how events unfolded as those involved in the democracy movement fled Beijing by any means possible make a tragicomic narrative. He made his way to Australia in 1992, and for years he tried to put all those experiences behind him. But dark memories have a way of re-surfacing. Guo’s boyhood experiences — watching ‘struggle sessions’ and executions during the Cultural Revolution; the suffering of his family during that period of collective madness; his army years; and, most particularly, the events of June 1989 began to preoccupy him more and more. In 2014, these memories would culminate in a subversive installation and a newspaper interview that led to his arrest, imprisonment and deportation.
Guo Jian in Conversation with White Rabbit from White Rabbit Collection on Vimeo

Guo Jian had returned to China in 2005 and he was profoundly shocked by what he found— the rush to modernisation left so much destruction in its wake as traditional architecture in Beijing was replaced by eight-lane roads and tower blocks, and whole neighbourhoods were demolished....
Read the rest of the article.HERE

Note that all photographs were provided by the artist and are reproduced with his permission.
Posted by An Art Teacher in China at 5:08 AM