On this final day of 2019, sitting at my desk with windows closed against bush fire smoke and horrifyingly hot winds, a fan blowing noisily at my feet, it seems this is the time to reflect on  a year of highs and lows. Lows there have certainly been; it has been a turbulent year of struggle and difficulty, of loss and grief, and of rising anxiety and even fear about the future that I know I share with so many. This is especially true now, when the orange disc in the sky seems almost apocalyptic and we are assailed by warnings about the air we breathe, which is equal in its polluted nastiness to any I have ever breathed in Beijing. But enough of that! One of my new year’s resolutions is to avoid the constant unsettling churn of media stories about Trump, Boris Johnson, Brexit, and our own deeply inadequate national leader: the unending reiteration of ‘news’ adds nothing to the quality of my life. Less social media too in 2020 – well, that’s the plan. But highs there have also been, not least the unconditional love of family and the absolute joy of being a grandparent. So, in this post there will be no wallowing. Instead, I’m going to celebrate some of 2019’s milestones, achievements, wonders and delights.

Milestones -- there were a few big ones. They included the completion of a significant book project I’d been working on since 2015 (you can find details HERE); the publication of an article in the Journal of Contemporary Chinese Art (HERE); an article in Art Monthly Australasia and a Quarterly Essay about Jingdezhen and porcelain for Garland (HERE); an essay for an NGV publication, ‘The Centre – On Art and Urbanism in China’; the presentation of a research paper at the Art Association of Australia and New Zealand Annual Conference in Auckland; a lecture to students at China Women's University, Beijing, a talk delivered via a Wechat video link to students at Peking University’s global Yenching Academy, and two talks at the NGV about the exhibition 'A Fairy Tale in Red Times' – and I’m another year closer to completing my PhD. I’ve continued my now ten-year-long study of Chinese (but, oh God, will it EVER get any easier?) Probably it's not surprising that I'm just a bit tired.
In late October I interviewed Beijing-based figurative painter Yan Ping, preparing to write an essay for a forthcoming book about this artist, who is not known as well outside China as her work deserves. Conducting a conversation via a WeChat video link-up late into the evening, with the artist, her assistant and my translator passing around their mobile phones in her Beijing studio was not without its challenges, and I spent a good part of the more than two-hour conversation seeing tantalisingly fleeting glimpses of the artist while the camera focused on pot plants in the background. But the talk was fascinating and revealed the life and work of an artist who was a new discovery for me.
Wonders and delights this year included interviews with extraordinary artists visiting Sydney, including Cheng Ran, Wang Guofeng, Cao Hui and Gao Xiawu (you can find those videos HERE) and in China. A meeting with Zhu Jinshi in Beijing in April was an absolute joy, as he spoke about his participation in the ‘Stars’ exhibition in 1979, his time living and working in Germany, and the thinking behind his extraordinary sculptural installation ‘The Ship of Time’.
I relished the opportunity to record long, in-depth conversations with 17 artists in their studios in Beijing and Shanghai, from significant established figures such as Song Dong and Yin Xiuzhen to rising stars Ma Qiusha and Lu Yang, and to talk with video pioneer Zhang Peili over delicate Longjing Tea and snacks in a teahouse on the shore of Hangzhou’s idyllically beautiful West Lake. An interview with Chen Hangfeng, who now lives and works between Shanghai and Amsterdam, was fascinating, and I wrote about his new work 'Excited with No Reason' in an article called 'Invasive Species and Global Trade Routes: A Conversation with Chen Hangfeng' for The Art Life HERE. 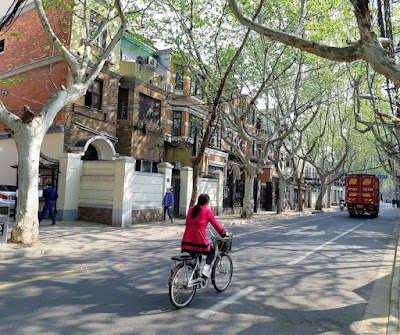 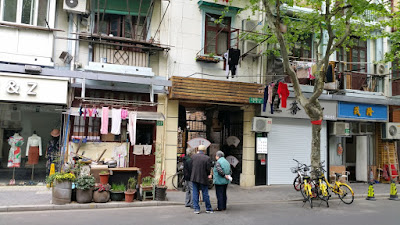 Just being in China is always a joy, and Beijing and Shanghai in April, with blossoming trees and gorgeous gardens, are especially beautiful. Not to mention the dancing aunties, Peking Opera performers and mahjong players in the parks. And the food!
In the ‘wonders and delights’ category - and as lists appear to be essential at this time of year - I add my favourite exhibitions of 2019. (Apart from the wonderful 'Hot Blood' and 'Then' at White Rabbit Gallery of course):

1. In Beijing, at UCCA, 'Mappa Mundi', the significant exhibition of Qiu Zhijie’s satirical socio-historical cartography of the strange world we now inhabit.
2. In Shanghai, at ShanghART Westbund, the installation work of Ouyang Chun in which every piece was constructed with objects retrieved from junk salvaged from the staff living quarters of Xi’an University of Technology, where the artist had once lived with his parents. The compound was about to be demolished, so Ouyang made three trips from Beijing to Xi’an and collected almost 12 tons of rubbish and household goods. From toilet seats to timber doors and windows, from thermos flasks and crockery to rusty bedsteads, battered suitcases and broken furniture, for Ouyang every object was imbued with traces of time and untold histories. I wrote a review of this exhibition, and an account of his work, in 'Reconstructing Memory: Ouyang Chun’s ‘The Mortals’ at ShanghART Gallery' for The Art Life. Find the article HERE
3. At Shanghai’s Long Museum,  I loved the major retrospective of the work of  extraordinary painter Yu Hong, 'The World of Saha', which she conceived as a 'visual opera' dividing her life into four acts. The exhibition included her 'Witness to Growth' series of self-portraits and her reflections on her life at the age of 50, 'Half Hundred Mirrors'. 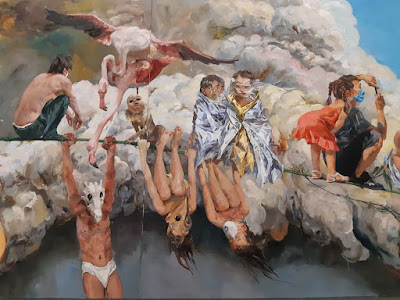 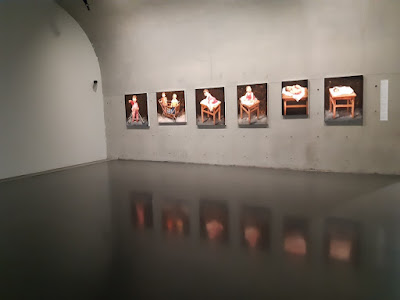 4. 'Remapping Reality' at OCAT Project Space Shanghai - the first comprehensive presentation of Wang Bing’s collection of Chinese video art from the post-Olympic era. OCAT said 'In this moment of historical rupture, the exhibition attempts to take the collection as a point of departure to develop a new narrative framework that, on the one hand, is able to account for the ironies and complexities of China in the age of globalization, while on the other hand addresses the possibilities of “continuity” that is emphasized in China’s public discourse as an integral part of the Chinese experience.'
5. At Pearl Lam in Shanghai, 'Material Lineage', an exhibition of work by Lin Yan and her mother Pang Tao, who is now in her 90s and recently had a solo show devoted to her work at Beijing's Inside Out Art Museum. This was especially interesting, as on the way to the airport in Beijing I'd seen the exhibition of works by Lin Yan's father, Lin Gang, at the CAFA Art Museum. Her grandfather, Pang Xinqun, was one of the founders of the modernist 'Storm Society' in Shanghai when he returned from Paris in 1930. You can find my story about Lin Yan and her extraordinary artistic lineage, 'Lin Yan: A Tale of Three Cities' in The Art Life HERE.
6. Cai Guo-Qiang's 10,000 porcelain birds at the NGV, in an inspired juxtaposition with the Terracotta Warriors. (And, of course, 'A Fairy Tale in Red Times' curated by David Williams from Judith Neilson's White Rabbit Collection).
And finally, in non-China related experiences – yes, I do occasionally have some of those! – I loved the Cindy Sherman show at London’s National Portrait Gallery in September, the William Blake show at Tate, a tour of the newly re-opened China rooms of the British Museum before the museum opened for the day (what a luxury to be in an empty museum!) and Berthe Morisot at Musée d’Orsay in Paris. I discovered the collection of treasures from across Asia in the Musée  Guimet, and must return there one day.


So, what will 2020 have in store? Perhaps ignorance is bliss. But hopefully, for Australia, RAIN and lots of it! For me, it's writing the PhD thesis, studying Chinese with more discipline and perseverance than before, continuing my research work and - how exciting - taking my daughters to Shanghai in April for their first trip to China. Signing out for now - 新年快乐! Xinnian Kuai Le! and a Happy New Year to all.

Posted by An Art Teacher in China at 7:44 PM