Seeing the Moon in a Dewdrop: Lindy Lee at the Museum of Contemporary Art 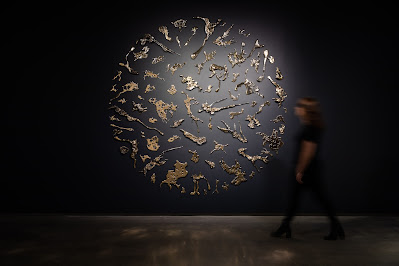 Appropriately enough at this tail end of the lunar new year celebrations, the review I wrote of Lindy Lee's survey exhibition 'Moon in a Dewdrop' at the Museum of Contemporary art back in December has been published in Randian this week. It's timely too, because her new solo exhibition at Sullivan and Strumpf has just opened - more on that show soon. And given that Facebook has exercised its unscrupulous might over the Australian government and blocked ALL news from its platform in Australia, it means that freelance writers and academics can no longer post links to their articles: posting references and links on this blog is now one of the few ways for me to share my writing with others who are interested in Chinese contemporary art, including the art of the diaspora and of  Australian/Chinese artists.

So my piece for Randian began with a personal reflection: Lindy Lee and I are of the same generation, and although our experiences and cultural heritages are quite distinct, we both entered an artworld in Australia that was isolated and insular in the 1970s, growing less so in the 1980s, and is now far more connected with the rest of the world. Here's the beginning of the article:

I vividly remember seeing Lindy Lee’s early works when they were first exhibited in Sydney in 1985 in Australian Perspecta and 1986 in the 6th Biennale of Sydney. Grainy, velvety black photocopies of famous faces – portraits by Jan Van Eyck, Rembrandt, Ingres, Artemisia Gentileschi and other images from the western art historical canon – were arranged in rows or grids. They gazed out from behind layers of acrylic paint, or wax that had been partially scraped back. Hints of darkened visages emerged through cobalt blue or deepest crimson pigment, making them appear unfamiliar and mysterious. Their characters seemed to be both concealed and revealed by the artist’s manipulations.

These shadowy works powerfully conveyed a sense common to artists and writers of my generation (and Lee’s): we were far from the action, on the other side of the world. The cultural centres, the ‘real’ art hubs, or so we thought then, were London, Paris, Florence, New York. We Australians were exiled to the periphery, inhabiting a postcolonial shadow world, a simulacrum – a pale photocopy, faded by the tyranny of distance. The art history we studied was almost entirely European and American; we feasted on images in reproduction, leafing through books with colour plates of Renaissance masters, and lined up for the (very occasional) blockbuster exhibition of works loaned from overseas collections at the state galleries. In that 1980s heyday of postmodern theory Lee’s works were discussed by critics and academics invoking Walter Benjamin and Baudrillard, but for me their interest lay in the connection forged between the artist and the mechanical reproduction. They suggested the angst of someone searching for a relationship across differences of time and culture. But there was more to Lee’s search than the general Australian awareness of the colonial ‘fatal shore’.

Lindy Lee was born in Brisbane in 1954 to parents who had immigrated from China. She grew up in the (then) stultifyingly parochial suburbs of Brisbane during the era of the racist White Australia Policy; just a few years earlier, in 1947, Labor politician Arthur Calwell had notoriously ‘joked’ in parliament that ‘Two Wongs don’t make a white’. This upbringing, and the experience of being the only Chinese child in her school, left Lee uncertain of her identity. Like other children of Australia’s post-war migrants, she felt she was somehow inauthentic – not quite Australian, nor quite Chinese. Her early, experimental work with photocopies examined her own sense of being a ‘bad copy’, an altered, faded reproduction of the ‘real thing’.

Read the whole article HERE on the Randian Online site - and subscribe to their newsletter for interesting articles, interviews, reviews on global contemporary art

Posted by An Art Teacher in China at 3:47 PM