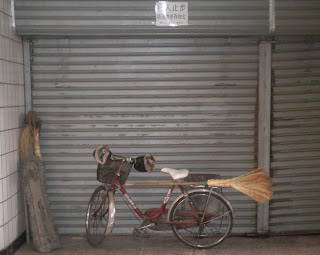 I am a little overwhelmed by Beijing tonight – by its sheer enormity of scale; by the 23 million people who live here and all seem to be riding bicycles or driving cars outside my window; by the exhaustion of struggling with the language in every shop, restaurant, café and taxi ride; by the incredible vitality, energy and fast pace of the art world, and also by the kindness and generosity of the people I have met today.
My day started with a walk in my local West Beijing neighbourhood, with the extreme contrasts so typical of Asian cities – from a hutong market, with people from the country, instantly recognisable by their dusty clothes and weather-beaten faces, selling literally just one basket of strawberries, buckets of eggs, or (inexplicably) a few piles of underpants or socks,  laid on a blanket on the ground next to their bicycles, or from dusty, rusted vans, to the Financial Street lined with international banks and glitzy hotels just a couple of streets  away.
The typical sounds of Beijing: bicycle bells and riders yelling (presumably) ‘get out of the way’, and the constant refrain of people hawking and spitting around you everywhere. I narrowly risked death crossing huge 8 lane roads where such irrelevancies as traffic lights and ‘Walk’ signals are completely disregarded by all drivers. I decided that if I stuck very, very close to old ladies or women pushing prams I might cross to the other side alive – so far so good! Then what I had feared happened – I realised I was completely lost. I have three maps which are all different and some streets are not marked on any of them. In my very bad Chinese I asked directions from people and found they were kind and helpful to this ‘waiguo ren’. I feel that I need to be like Ariadne in the Minotaur’s maze and unwind a string behind me – here is the huge disadvantage of not being able to read characters. Eventually, to my very great relief, I recognised a shop called, bizarrely, ‘Comfortable Clothes’, (which all appear to be anything but) and realised I was back on the right street.
In the afternoon I meet Tony Scott, who has lived and worked in Beijing as the founder of  ‘China Art Projects’ for nearly 20 years. We go later to an art gallery opening, talking all the time about the Beijing art scene, the many and varied challenges of operating in this fluid environment, and the artists that CAP represents. This is the year of Australia in China, and 2012 is the year of China in Australia. Tony shows me beautiful works by Hu Qinwu, whom I hope to meet for an interview next week. His works on paper using rich layers of tempera, on which he has dropped water to create an abstract grid of circular forms, are very subtle and restrained, but also rich and evocative – an international language of abstraction which also references Chinese tradition. Tony tells me that he will exhibit Hu QInwu together with an Aboriginal artist in Melbourne next year – this seems to me an inspired and interesting idea as the juxtaposition of the works would suggest so many resonances, both visual and spiritual. I also see some works where the artist has burned holes in Buddhist sutra books, obliterating certain characters or symbols as a comment on those who pay lip service to the forms and practices of religion but do not sincerely live it. I also feel very fortunate indeed to see some extraordinary prints by Gonkar Gyatso, the Tibetan artist who has lived and worked in London and New York, and was seen in Brisbane in the most recent Asia Pacific Triennial and is also represented in the White Rabbit collection in Sydney.
Then to an opening out at ‘C Space’ at Caochangdi Art District – the gallery spaces are incredible and enormous – Sydney gallerists would kill to have access to spaces like this. The works are by Liu Gang, an interesting young photographer who created an artwork for the exhibition ‘Double Infinity’ in the Dutch Culture Centre at the Shanghai Expo last year. The works are based on the ‘European’ satellite cities outside Shanghai, which have just ‘copied and pasted’ European towns (one is based on Dutch houses) and which have become ghost towns due to a lack of infrastructure and services. Conceptually very interesting work, and Tony told me about another series of Liu Gang’s, where he took glossy magazine real estate advertisements, crumpled them up, then spread them out again and re-photographed them. Like so many other Chinese artists, his work is a comment on the rapid and extraordinary changes in Chinese society. 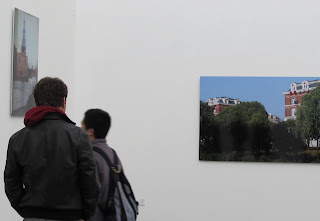 Then, on to a dinner hosted by Brian Wallace, from Redgate Gallery, at an extremely trendy (and fabulous) Yunnan Restaurant.  I feel so incredibly fortunate to be there, really at the beating heart of the art scene in Beijing. The dinner celebrates not only the opening of the new Redgate Exhibition, but also Brian’s 20 years of operating the gallery. His was the first commercial gallery in Beijing when he opened in 1991, located in the old Ming dynasty watchtower at Dongbianmen, and it is widely recognized as a pioneer in China’s dynamic contemporary art scene. The other very significant and influential aspect of Redgate is its well-established artist residency program, which has given so many Australian artists the opportunity to live and work in China, and to create bodies of work inspired by their experience here.
I am fascinated by what seems to be such a strong thread of connection and dialogue between Australian and Chinese artists, and also by the way that Australians such as Tony and Brian have come to Beijing and just stayed – this city seems to  exert a very strong pull on so many ‘expats’.
Tonight at dinner I meet a young Canadian journalist who has worked in both Japan and China for the last 12 years, an American journalist who has spent the last 20 years in Asia and now wonders whether the USA could ever be home again, a New Zealander who lived in Paris for many years working for Sotheby’s, and now lives in a traditional Chinese ‘hutong’ house here in Beijing, and an Australian artist who lives in Balmain but who moves backwards and forwards between the two cities. This was just a small and fascinating cross-section of the dinner guests, who numbered perhaps 40. Languages spoken at the table included French and German as well as English and Chinese. The Chinese artists smoked a lot but said little – however, when they spoke, everyone paid attention.
This new Redgate exhibition, ‘China Dream’, which I will see when I go to the gallery on Monday, is curated by Brian and artist Chris Gill, who has lived in China for almost 20 years and is now based in Shanghai. Works by Chris are showing with two other venerable and highly regarded Shanghai artists, Pu Jie and Xue Song. All three artists are represented by Lorenz Helbling’s ShanghArt gallery, which I will visit when I am there in about 10 days’ time.
Quite early in the evening I was completely overtaken by exhaustion and had to retreat to my hotel, braving my second taxi ride of the day – hoping that my cheerfully smiling taxi driver could actually see the very small printed characters on my hotel card, and that I wouldn’t be needing any of those scary phrases suggested in my Lonely Planet Phrasebook, such as “Stop the car immediately” or “I will take down your licence number and report you to the PSB”. I have practised saying “Please turn the meter on” and “please give me a receipt”, but as it turned out both things happened automatically and here I am safely home, having survived the traffic, the taxis and the Beijing artworld.
All I can say at this point is “Toto, we’re not in Kansas anymore”.
Posted by An Art Teacher in China at 2:34 PM