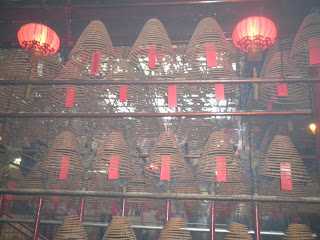 Outside my window this evening the traffic roars with much blowing of horns, and the toy-like Star Ferries slowly criss-cross Victoria Harbour, making their way from Tsim Sha Tsui to Wan Chai and Central. The Hung Hom route has been cancelled since last week, which caused numerous protesters to throw themselves into the harbour. Another loud and noisy demonstration has taken place protesting the arrest of an old ‘egg waffle’ seller by the Health and Sanitation Police. As one young artist told me, people in Hong Kong live and breathe politics and they love to make their opinions emphatically heard. Even the sound of spoken Cantonese is so loud and declamatory in contrast to Mandarin – old ladies, in particular, always sound as if they are having a passionate argument. 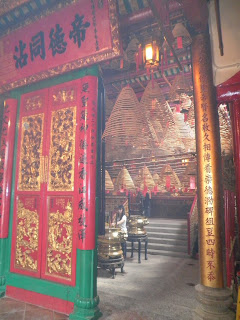 Interior, Man Mo Temple
Since Sunday I have done a huge amount of walking around the streets of Kowloon and Hong Kong Island, visited the Hong Kong Art Museum to look at traditional Chinese painting in greater detail, met two more very different and interesting artists and visited another impressive international school.
This morning I spent a couple of hours talking with Carol Lee Mei-kuen in her lovely, airy apartment which is  filled with orchids and other plants, books and artworks . She makes beautiful, elegiac and poignant works using a most unusual technique of her own invention, reminiscent of early 19th century daguerreotype or cyanotype photographic experiments. Quite by accident, while involved in a project making a quick expressive drawing in ink on newsprint paper every day, like a diary,  she discovered that the yellowing of the newspaper was in itself visually interesting. It was also symbolic, representing the passage of time and the ephemeral nature of the world and of human relationships. 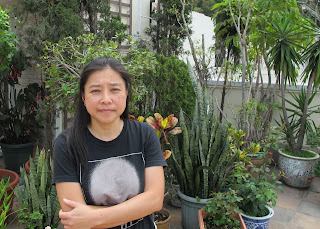 Carol Lee Mei-kuen in her rooftop garden, photographed by Luise Guest and used with permission of the artist 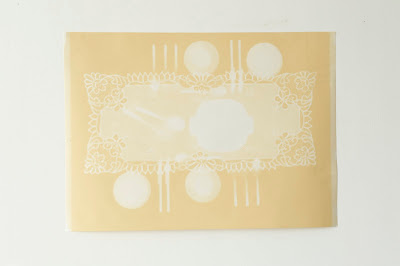 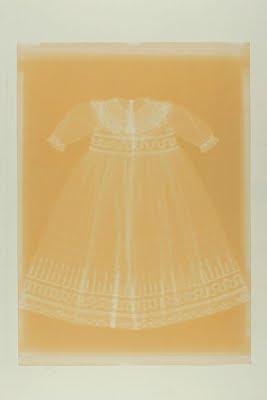 'Little Lace Frock'
Then, while removing books which had been on her bookshelves for many years, preparing for moving, she found they had also left paler marks on the shelves and on the wall behind them, again representing for her a kind of memento mori. Thus her technique was developed – she lays sheets of paper on the ground in the sun, under a window or on the tiles of her terrace, and places objects (a baby’s dress, a scarf, a curtain, or domestic objects such as lace tablecloths, brooms, kitchen utensils) upon them to create soft and delicate images like trace patterns of the sun's movement, in subtle shades of gold, yellow and warm browns. Some works also have sharper, clearer images created by cut stencils reminiscent of traditional Chinese paper cutting. Some have drawings applied in small areas of the surface in ink, referencing Carol’s original training in the traditions of Chinese ink painting.
After much experimentation and research she is able to control the degree of yellowing on each sheet of paper, and manipulate it with great subtlety. These are essentially photograms made without chemicals, reliant upon natural forces, and by their very nature carrying within them a meaning of transience, change, loss and a sense of the impermanence of all things. They are very beautiful surfaces, sometimes pitted with the tiny marks caused by raindrops, falling leaves, or the passage of birds and insects across Carol’s  rooftop terrace garden. Some works are very large and multi-panelled, some are small and intimate, but all are at once deeply personal, dealing with relationships and the absence or death of loved ones, and absolutely universal. 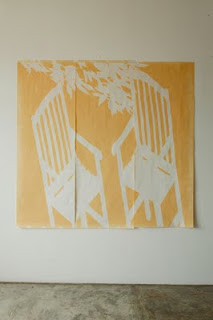 Carol Lee Mei-kuen, Close to the Dusk, 2009
http://www.carolleemk.com/index.php
Later, in almost complete contrast, I met Wong Chung-yu in his office on the 15th floor of the Hong Kong Polytechnic University’s Community College, where he teaches in the Design faculty. We overlook vast towering apartment blocks - it is like looking out the window onto a painting by Jeffrey Smart. Like so many of the other artists I have met both in Hong Kong and on the mainland, Wong manages to layer a deep attachment to the traditions of Chinese art and culture, with new ideas and new forms. He has a commitment to ‘harmonise digital technology and new media with a Chinese context’. Influenced by a lecturer in Chinese painting who incorporated elements of western and modernist painting practice into his own work, Wong Chung-yu initially attempted to modernise Chinese painting, both in terms of the techniques he used and the subject matter. 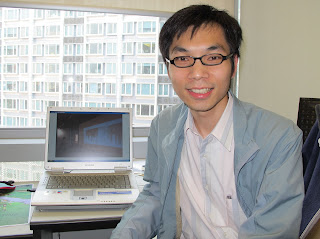 Wong Chung-Yu, photographed by Luise Guest and used with permission of the artist
After hearing a lecture by a German digital media artist, Wolfgang Munch, he began to think about how he could integrate digital media into his practice, and created his first digital artwork in 2003. Since then he has been able to combine his knowledge of programming (his first degree is in Computer Science) with more traditional Chinese ink painting techniques, in works such as ‘Spiritual Water’. In this work a landscape painting lies flat, like a traditional scroll, with a central blank area which is actually a screen with back projection. When the viewer touches the screen, a web cam is activated and the work then digitally simulates the diffusion of ink marks made by traditional ink painters and calligraphers. Later works such as ‘The World’ (an audio and narrative work) and ‘Spiritual Water II’, in which a black ink waterfall splashes and tumbles in constant motion, use random animation techniques. In ‘The Memory of Stars’ an ink painting hangs on the wall and is juxtaposed with a screen on which a similar image is projected. This image, however, changes in subtle and continuous ways, and requires a computer running in real time. Wong Chung-yu will have a second solo show at Hanart TZ in Central this September, and he is planning some new computer applications and more interactive works which pose questions about the relationship between audiences and artworks. He says, ‘What I am interested in is how to reinterpret Chinese traditional art in a new way.”

Spiritual Water 2 (non-interactive version) Detail 1
靈水二(非互動版)
Digital media
100H x 300W (CM)
2009
In their different ways these are essentially questions of identity and belonging, questions posed by each of the artists I have met. Artists everywhere, of course, are interested in aspects of identity, whether cultural or personal; however they seem to have a greater resonance in this Chinese context. They are also questions posed by schools – whether Australian schools thinking about the kind of school culture they wish to create for their specific students with their specific needs, or, as in the schools I have been visiting, schools which cater for a transient population of ‘third culture’ children.
Yesterday I visited the Canadian International School in Aberdeen,  a school with a most impressive campus, built on a steep hillside overlooking Aberdeen Harbour, catering for students of 40 different nationalities (although the largest group is Canadian or US citizens, and many of those with Chinese heritage). The medium of instruction is English, but all students from Reception to Grade 9 study Chinese, after which they may also elect French. Students from this school graduate with both the IB Diploma and the Ontario Certificate of Secondary Education, and teachers have integrated both curricula into their teaching programs. The art teachers told me they did this without any difficulty, as the philosophical basis of each curriculum was similar. The school is technology rich, with a Mac notebook for every student from Grade 3, and classrooms of Apple computers for the younger years as well. Like many Hong Kong schools, they learned some hard lessons from the SARS epidemic and are now equipped to run virtual classes in very quick response to a natural disaster, an epidemic, or any other event of such a magnitude that forced the closure of the school.
I was fortunate enough to be able to see the exhibition of IB Diploma works, and was impressed by the thoughtful way in which these 18 young people had attempted to communicate significant issues relating to family, cultural and personal identity (yes, again!) and issues of significance to them, such as environmental degradation. I was impressed also with the ways in which students showed their awareness of contemporary practices in both international and Asian art, through their techniques and materials as well as their subject matter and imagery. One installation dealt with the thorny topic of family pressure in the student’s choice of career and university course. This student had been involved in some intense family discussions at the dinner table about his preferred choice of an art related course versus his parents’ desire for him to study law. He had covered a table and chairs, walls, windows and floor, rice bowls, chopsticks and spoons with newspaper covered in university entrance marks, college entry requirements and course listings, representing his feelings of being overwhelmed and pressured about these significant decisions. His parents were game enough to pose with him and be photographed for a ‘family portrait’ in this claustrophobic environment. A most interesting and truthful work by this young artist.
The school is offering IB Film for the first time next academic year, and I had a very interesting conversation with the teacher about the demands and challenges of implementing such a course. I have been interested in speaking to IB Film teachers at Western Academy Beijing, The Shanghai American School and the Hong Kong Australian International School, to see how the course operates in both theoretical and practical ways, allowing students to work collaboratively, and to make works which show their knowledge and understanding of cinema history and film language. I have also been impressed with the content and pedagogy of the IB ‘Theory of Knowledge’ course. We often talk about metacognition and how to incorporate it into our practices, and this is a rich example in action. After I make my final school visit to HKIS on Thursday, it will be interesting to begin comparing and contrasting aspects of the different schools I have visited, to see what are the essential elements I can distil from these travels across 4 different cities. 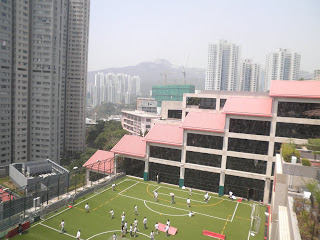 Looking from the art rooms over the playground at the Canadian International School, Aberdeen
Posted by An Art Teacher in China at 7:28 AM