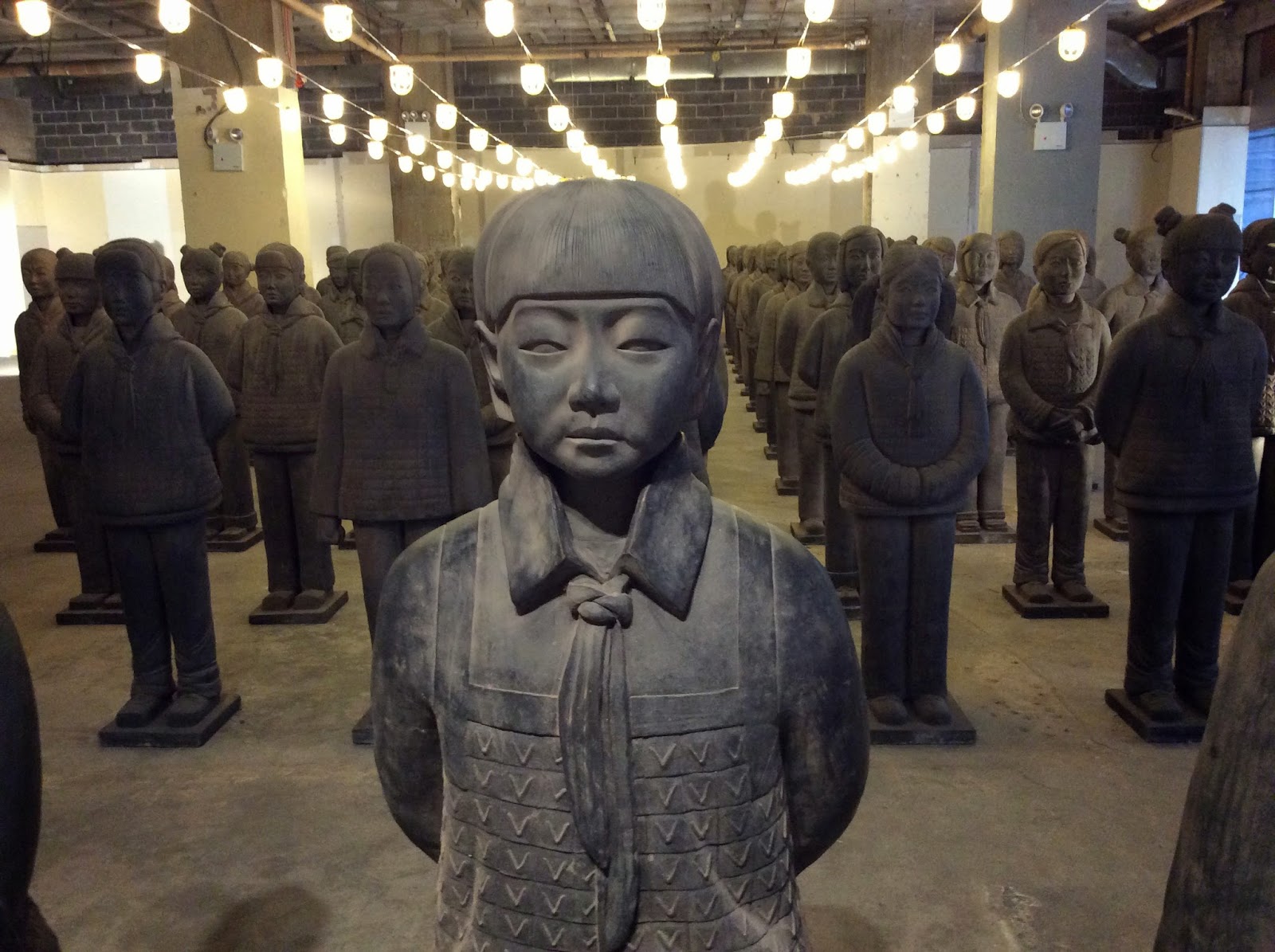 In June 2012 artist Prune Nourry travelled to Xi'an to interview Professor Li Shuzhuo, a leading academic whose specialisation in sociology is the study of gender preference in China. The preference for sons has a long, long history. Long before the One Child Policy and its (no doubt unintended) consequence of an over-abundance of unmarried young men, female babies were often killed at birth.  Nourry's work always begins with a research project, investigating an issue of social significance. Having worked in India, she became fascinated by the results of this gender imbalance, so deeply embedded in culture, history and social policy, and the resulting misery and social instability it causes.

Nourry decided to work with traditional skilled artisans in Xi'an, home of the original Entombed Warriors - and the gazillion reproductions sold with unrelenting fervour in every corner of that city. Those damn warriors are everywhere in Xi'an, from the doors of restaurants to the lobbies of hotels; from Starbucks, and department stores to the most run-down of tiny local shops and noodle stalls. They come in every conceivable size, in terracotta, fibreglass and plastic, and their images adorn every possible surface. You might think that by the time you have made it past the souvenir stalls with their (expensive) warrior replicas, and ignored the local government harridan who tries to force you to buy a copy of a guidebook signed by the old farmer who originally found the site (whilst digging for a well) and then survived the onslaught of hundreds of people trying to sell you touristic tat, that the real buried army may seem utterly diminished. You would be wrong. Despite being crowded in with hordes of tour groups from every corner of China, and a few hardy souls from elsewhere; even in the loud chatter and constant flash of cameras  and people taking smartphone selfies, you cannot help but be awe-struck.

Nourry selected the powerful image of that buried army as her equally potent metaphor for the army of unwanted girl children in China  - aborted, abandoned, orphaned, kidnapped and sold, forced into marriage or prostitution. There are more  tragic stories than there were soldiers and courtiers serving the Qin Emperor. She has created an army of lost daughters. 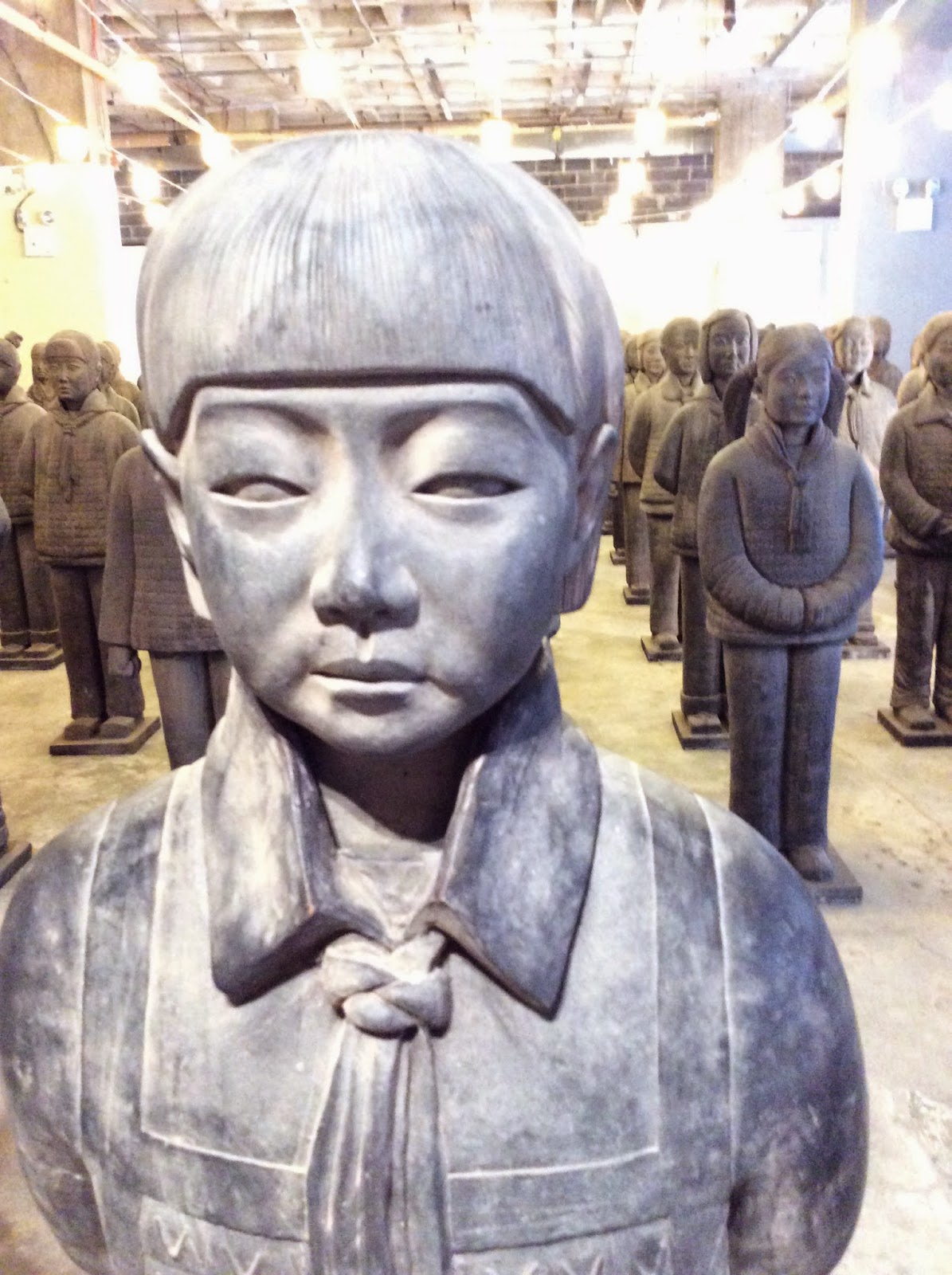 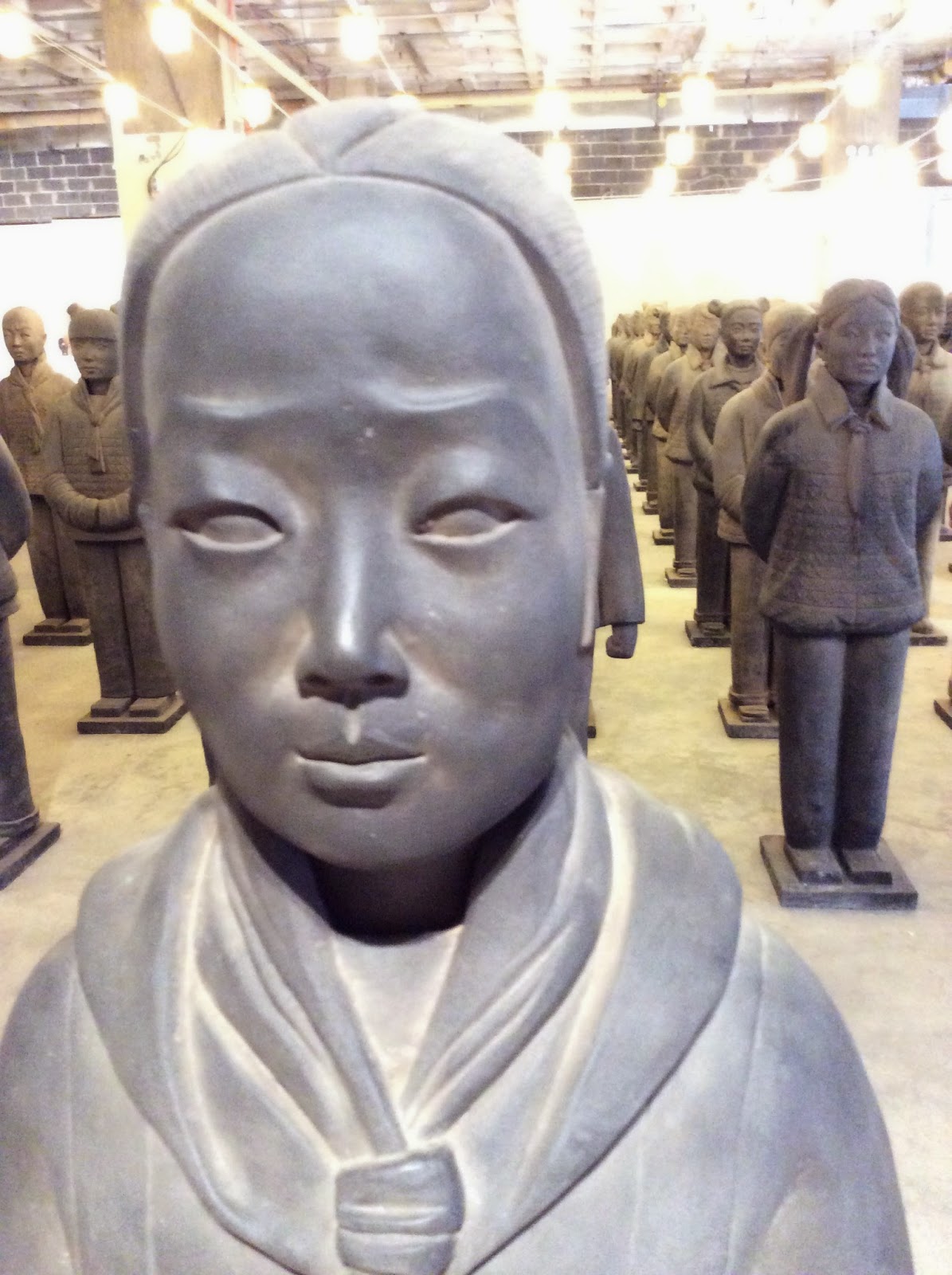 I saw the installation in the new downtown building of the China Institute in New York two weeks ago. The building is so new that it is still under construction and I was asked to sign a waiver indemnifying the owners before I entered the space. As someone familiar with Chinese electrical wiring and construction codes (generally notable by their absence) I found this pretty amusing. The raw concrete and dim lighting of the space, a block from Ground Zero and the 9/11 Memorial, was oddly appropriate for wandering through the army of girls, so touching in their silence and stillness. 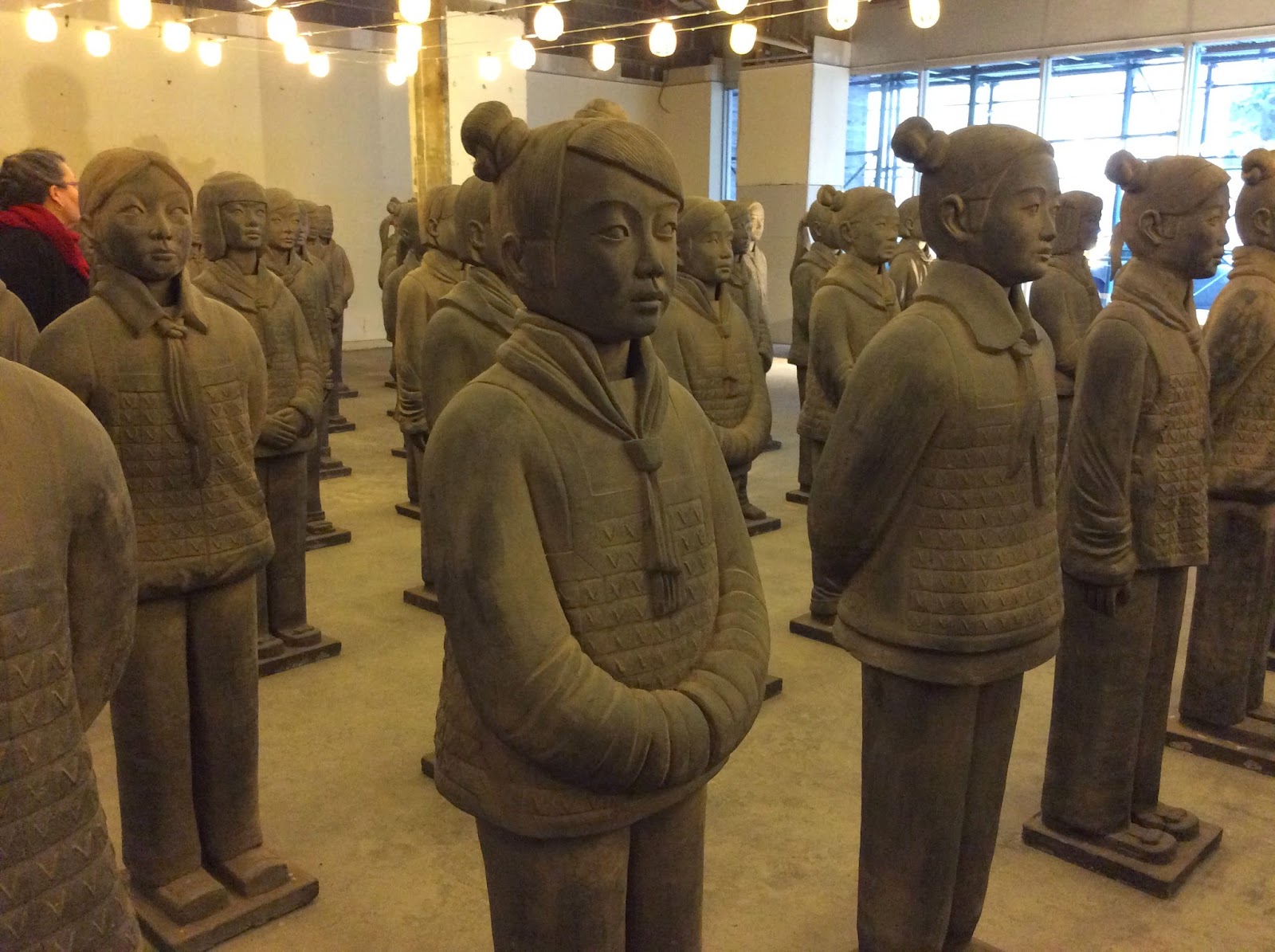 Nourry met the 8 orphan Chinese girls that inspired her work through the non-profit organization The Children of Madaifu, which was founded in 1999 by Marcel Roux, former Vice-President of Doctors without Borders. She photographed the girls during her visit to their respective villages in August 2012, and uses the portraits as models for the sculptures.
She then asked the craftsmen to make the moulds for combinations of 108 terracotta daughters. One of these artisans skilled in the traditional terracotta techniques, Wen Xian Feng, individualised each face based on Nourry's originals to ensure that each girl is unique. The artist works with The Children of Madaifu to support the education of the 8 little girls with the sale of the 8 original sculptures.
The installation has been shown in Shanghai, Paris, Zurich and now in New York. After taking it to Mexico City Nourry plans to return the work to China to be buried in 2015, creating a contemporary archaeological site for future excavation in 2030, when sociologists predict the Chinese gender imbalance will be at its peak.
I found the Terracotta Daughters very beautiful, and very evocative despite - or perhaps because of - its simple treatment of a complex and tragic social issue. The girls in their rows are reminiscent of children lined up for compulsory collective exercises in an elementary school playground, or the mass singing of revolutionary songs in the past. They possess the same gravity as those long-ago archers and warriors. Their Young Pioneer scarves, contemporary ponytails  and clothing are treated in a similar way to the Qin army, as engraved surfaces. They gaze past you with sightless eyes. 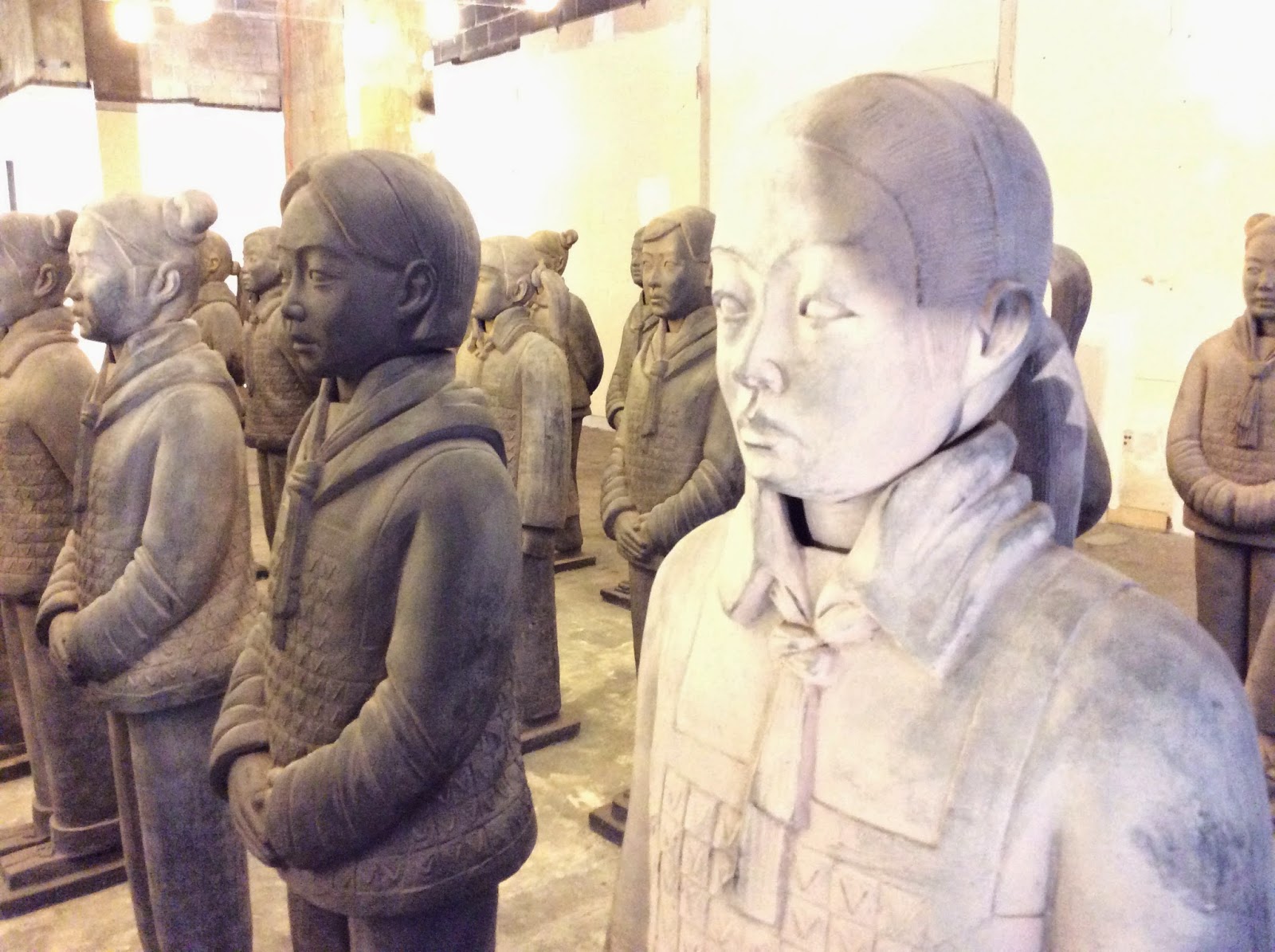 Too late I discovered that Nourry was having a simultaneous exhibition in a Chinatown foot massage centre, where she was showing another series of works based on reflexology, traditional Chinese medecine and philosophy. And you could get 20% off a massage. Now that's art for the people!
Nourry's website: http://www.prunenourry.com/en

Posted by An Art Teacher in China at 4:42 AM