I write this preparing to leave Beijing today, after a week so filled with studio visits, galleries, and interesting conversations with artists that it seems much longer. The skies have been miraculously blue every single day this week, which hardly seems possible in this city of "airpocalypse" - and without even an APEC conference of world leaders to explain it. The term "APEC Blue" entered the language last month, with phrases such as "He's not that into you, it's just an APEC blue" flying around the internet. In a city where the posh international schools have all erected air-filtered domes over their sports fields and playgrounds, I have loved walking around the city streets this week without a mask. For people like me who wear glasses, the addition of a mask often results in walking blindly into lamp posts with fogged up lenses obscuring the little vision that remains through the grey enshrouding fog. 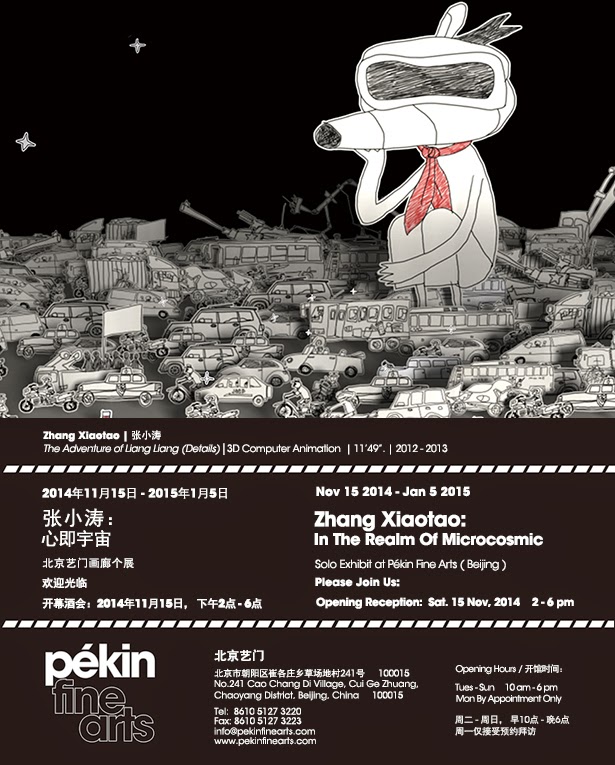 Yesterday I spent almost two hours at Pekin Fine Arts talking with Zhang Xiaotao about his extraordinary, immersive and very beautiful video and 3-D animation works, which he showed at last year's Venice Biennale. A delightfully unpretentious interviewee, he spoke of his idealistic hopes that China could experience a Buddhist Renaissance, and return to its historical and spiritual roots, something he conveys to his students at the Sichuan Academy of Fine Arts where he is Director of the New Media Department. Unlike many other contemporary Chinese artists, who tend to dismiss out of hand the idea that they might be informed or influenced by the work of other artists, he spoke movingly of how much he admired his teacher and "master", Xu Bing, currently his PhD advisor. We talked about Xu Bing's work "Phoenix" (Huang Feng) which I recently saw in New York, and how the central element of Xu's work is the conceptual basis - in this case his admiration for the lowly, badly treated migrant workers on whose toil the modern cities and the wealth of China are built.
Zhang told me that despite the massive technology and big teams of assistants working on his projects, it is the ideas behind the work that really matter. Joseph Beuys' notion of "social sculpture" lies somewhere behind his practice in new media and his earlier (and continuing) practice as a painter. He is something of a visionary, and a futurist. His work Sakya, (2010-2011) depicts most directly the struggle to retain spirituality and religious devotion within the context of China’s urbanised and consumerist present day. Based on an important Tibetan temple partially destroyed by the Red Guards during the Cultural Revolution, Sakya combines the imagery of video games, science and science fiction, Buddhist mandalas and thangka paintings and sutras. It is meditative and very beautiful.

In China, despite all the hoopla of the art market, there is still a strong belief that art actually matters. In a world in which, increasingly, art is simply another branded luxury commodity, I so much enjoy the earnest sincerity with which Chinese artists speak about their practice. I also appreciate the sheer technical virtuosity of their work, whether it takes the form of painting, video, or sculpture. Look out for my full interview with Zhang in The Art Life in January. Liang Liang,in which he animated his little son's whimsical drawings to create a fabulous allegorical narrative in which China's past and present are interwoven, together with elements from video games, "Journey to the West" and cartoon monsters, is a wonderful thing. And the airport as a metaphor for hell - that I can relate to!
Another highlight of this visit was finally meeting an artist I have admired for a long time, Tao Aimin. Tao's "Book of Women" series uses the washboards traditional in rural China as sculptural found objects and also as "collagraph plates" to create prints and paintings, combined with characters from the ancient secret women's script 'Nushu'. This was one of the works that originally intrigued me and prompted me to begin this extended research project investigating the work of Chinese women artists. Originally from a farming family in rural Hunan Province, she spoke of living with her grandparents on their orchard, collecting eggs and feeding chickens. As was traditional, her grandparents made their own coffins, which stood in the house and became like big black pieces of furniture. Now, she says, they haunt her dreams. The first washboard was given to her by a 93-year-old woman with bound feet who became her landlady, and her friend. Now, she has more than one thousand, and has collected the stories, recorded on video, of the women to whom they belonged. Like many other Chinese women I speak to, she denies that she is a feminist, identifying feminism as a western thing of no relevance to Chinese culture. As for me, I think that if artists like Tao Aimin, Lin Tianmiao, Gao Rong and Yin Xiuzhen, to name a few, are not feminists then nobody is! 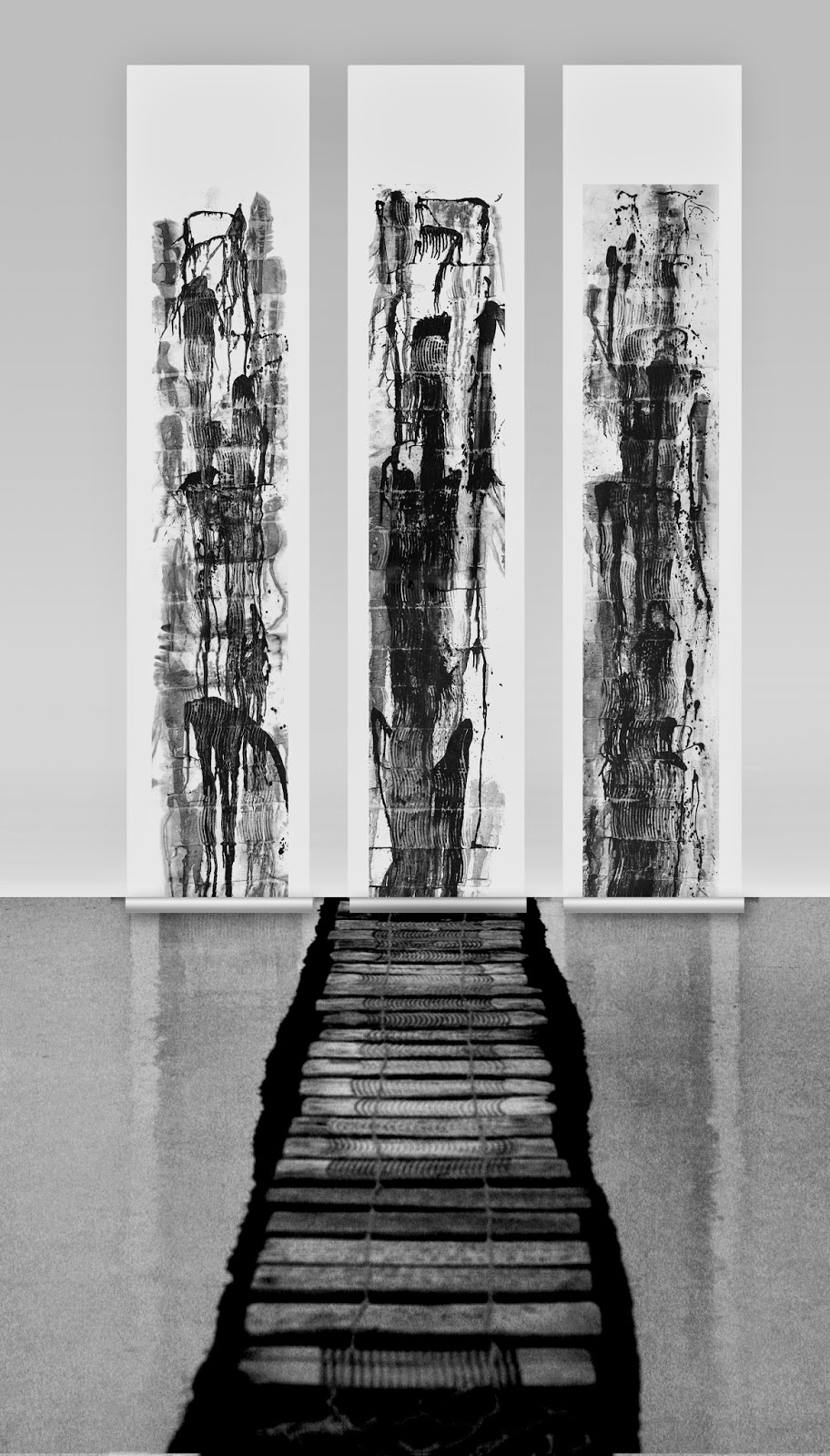 Almost without exception, each artist I have spoken to this year has wanted to talk about Buddhism. From the painter Hu Qinwu whose abstract paintings are like Buddhist sutras,to Liu Zhuoquan and his worlds painted inside bottles and containers,  to Gao Ping who wanted to ask me what I thought about the comparison between Buddhism and Christianity, to Cui Xiuwen who has returned to a study of Buddhist belief to inform her new abstract video and digital works, to He Chengyao who came back to Beijing completely changed after a year in Tibet, each is preoccupied with seeking the spiritual dimension in their life and work.  It seems that like so many people in China today these artists (and so many others) are sensing a hollowness at the heart of the new Chinese society wrought by Deng Xiaoping's economic reforms after the death of Mao, and the embrace of a market economy. Whether there will be a "Buddhist renaissance" as Zhang Xiaotao wishes is another matter - the genie is perhaps too far out of the bottle.
An unexpected delight was the opportunity to see Huang Yong Ping's extraordinary "Thousand Armed Guanyin" at the Red Brick Art Museum. I had seen it before at the last Shanghai Biennale, but it was somehow more impressive in three sections in the almost deserted new museum on Beijing's outskirts, rather than the Shanghai Powerhouse of Art. 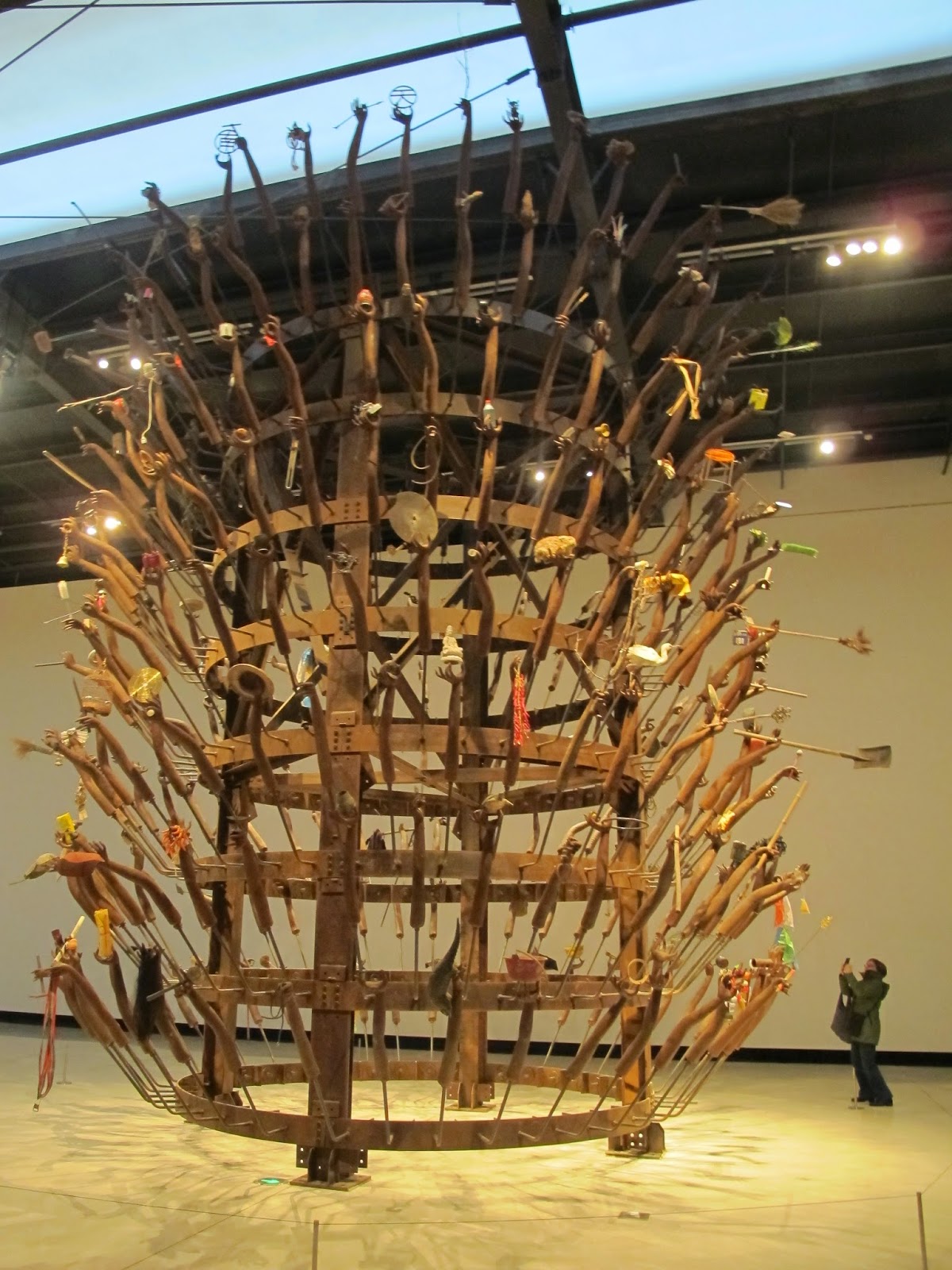 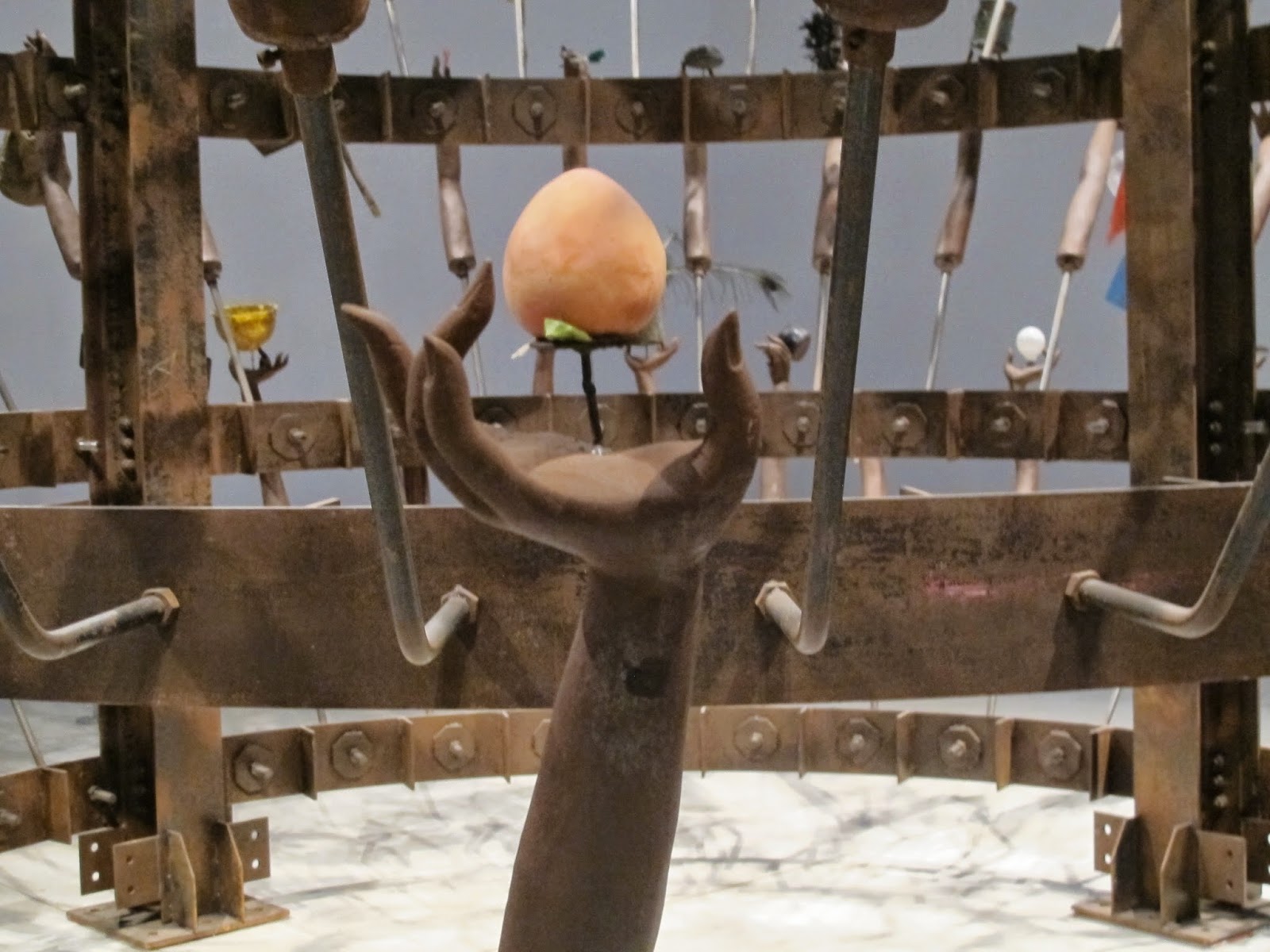 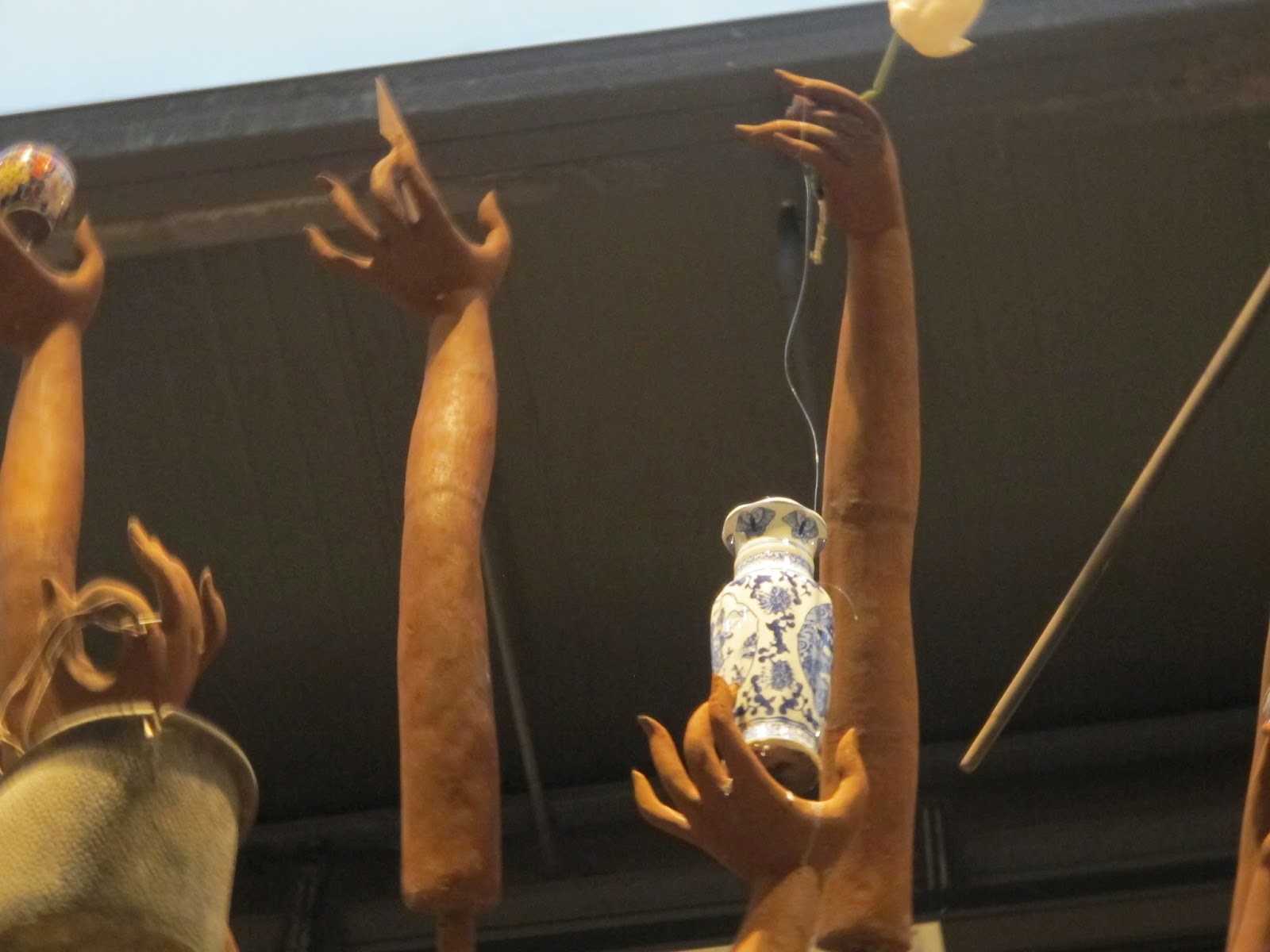 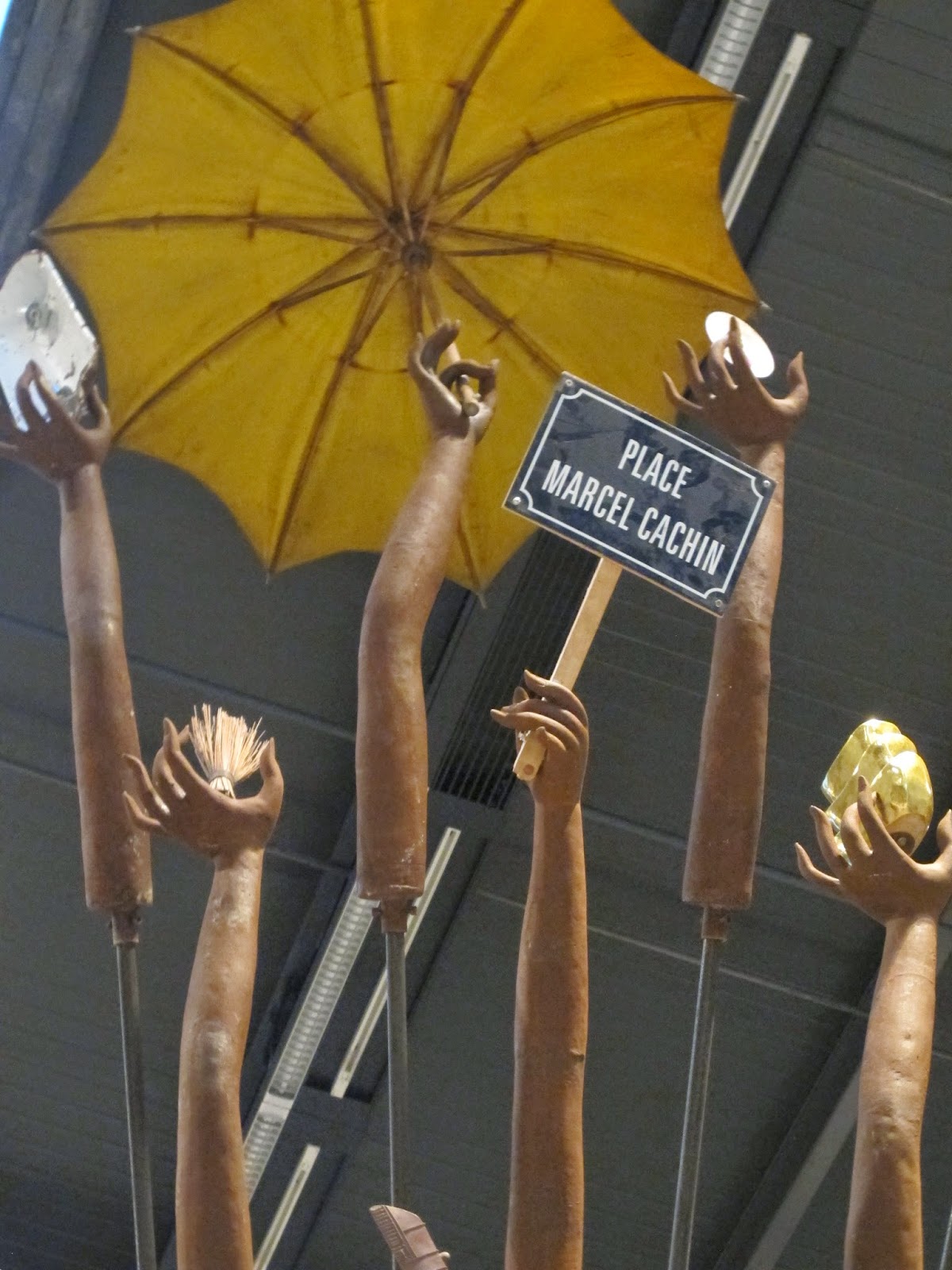 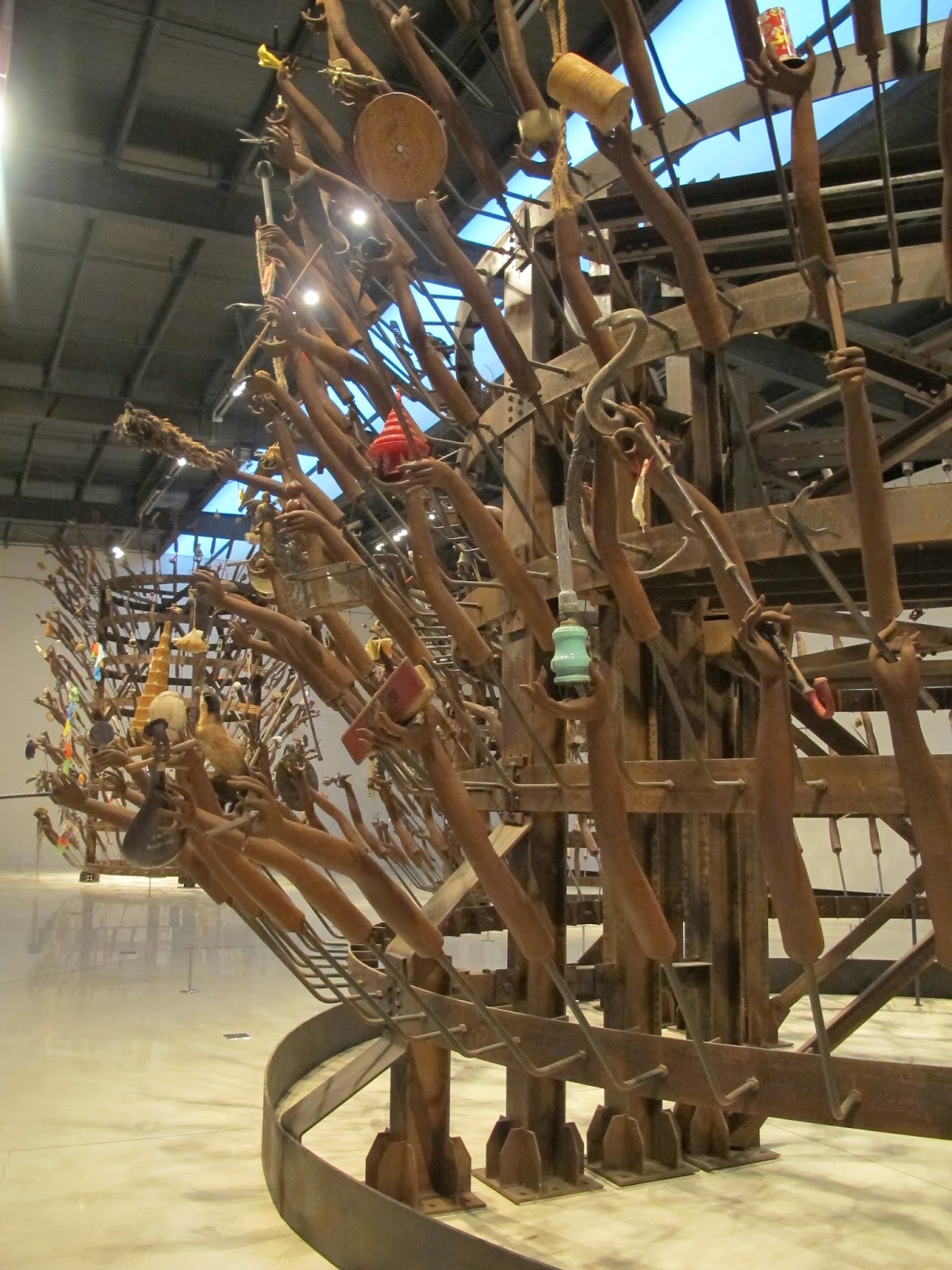 Now, on my way to Shanghai, here are some more of my random #onlyinChina observations:

In Shanghai this week I will meet the sculptor Yu Ji, go the the opening of Fang Lu's new work at OCAT, and the Shanghai Biennale, and travel to Hangzhou to meet the painter Wang Zhibo. Watch this space!
Posted by An Art Teacher in China at 5:57 AM