On the website of the Shanghai Biennale: "Free of charge for active army men, retired cadres, and dependents of martyrs, visitors with disabilities, and seniors over 70"

I have arrived in this exciting city of Jetsons-style futuristic overhead freeways, and flyovers, a veritable  concrete spaghetti, after the increasingly usual unexplained flight delays out of Beijing. Colonial and art deco buildings poke their heads above the freeway walls, and apartments with gold domes and cupolas gleam in the sun. At Hongqiao airport an exhibition of traditional ink painting sits side by side with a Chrysler show-room full of gleaming vehicles. This too is "socialism with Chinese characteristics." I have to get used to taxi drivers saying "Qu nali? " (where are you going?) Instead of the Beijing "Qu narrrrrr?" Immediate observation: Shanghai street style is very cool indeed compared with the more pragmatic and prosaic Beijing. The streets of the French Concession district are full of young guys in big overcoats with designer glasses and geometrically sharp haircuts. The notable exception to the high style aesthetic is that truly eccentric Shanghainese habit of wearing pyjamas - often bright pink flanellette, printed with Hello Kitty or Snoopy characters - in the street. They are sometimes paired with high heeled shoes and ankle socks. The addition of a puffy down jacket in a virulent shade of electric blue is often a notable feature as well. 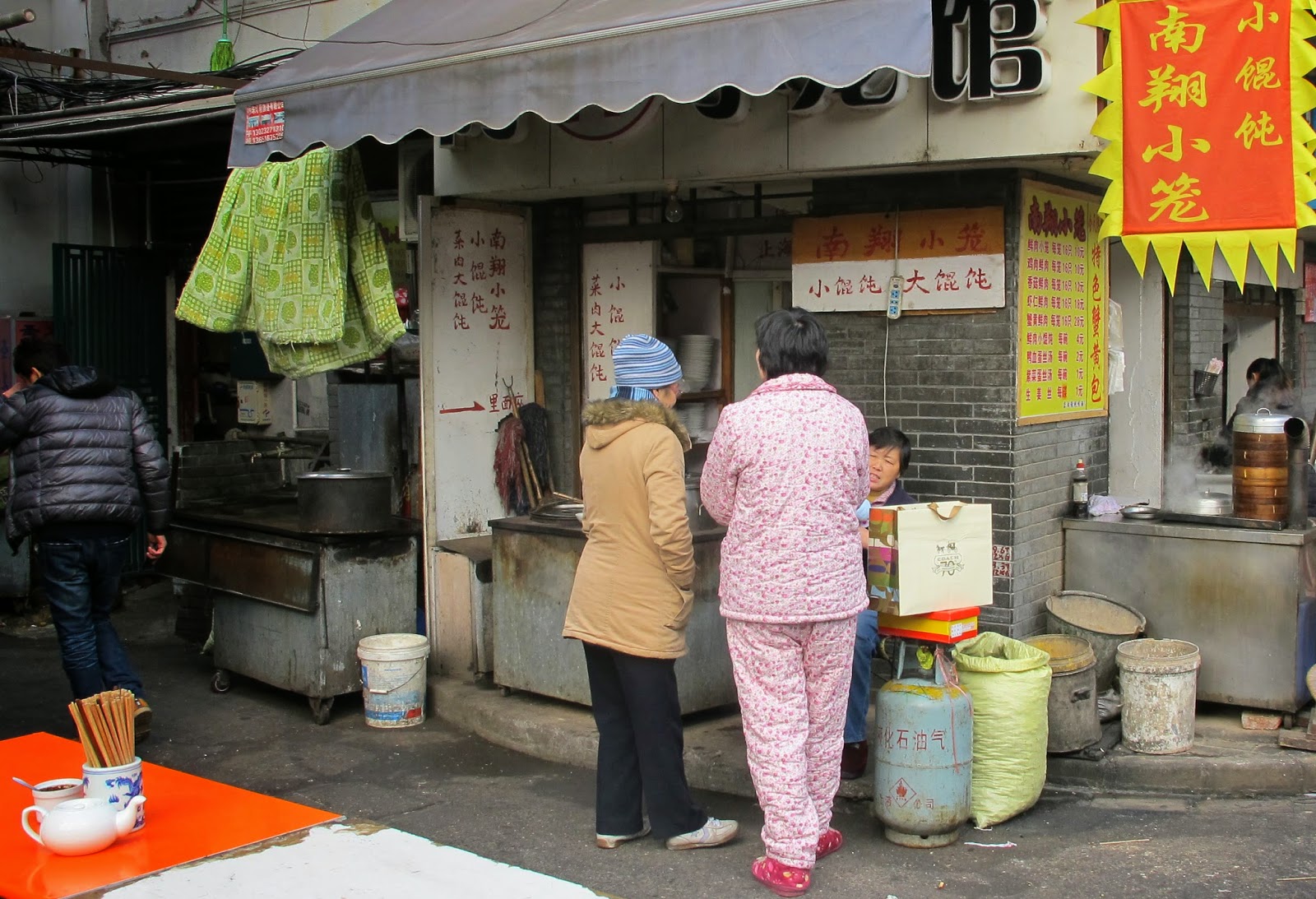 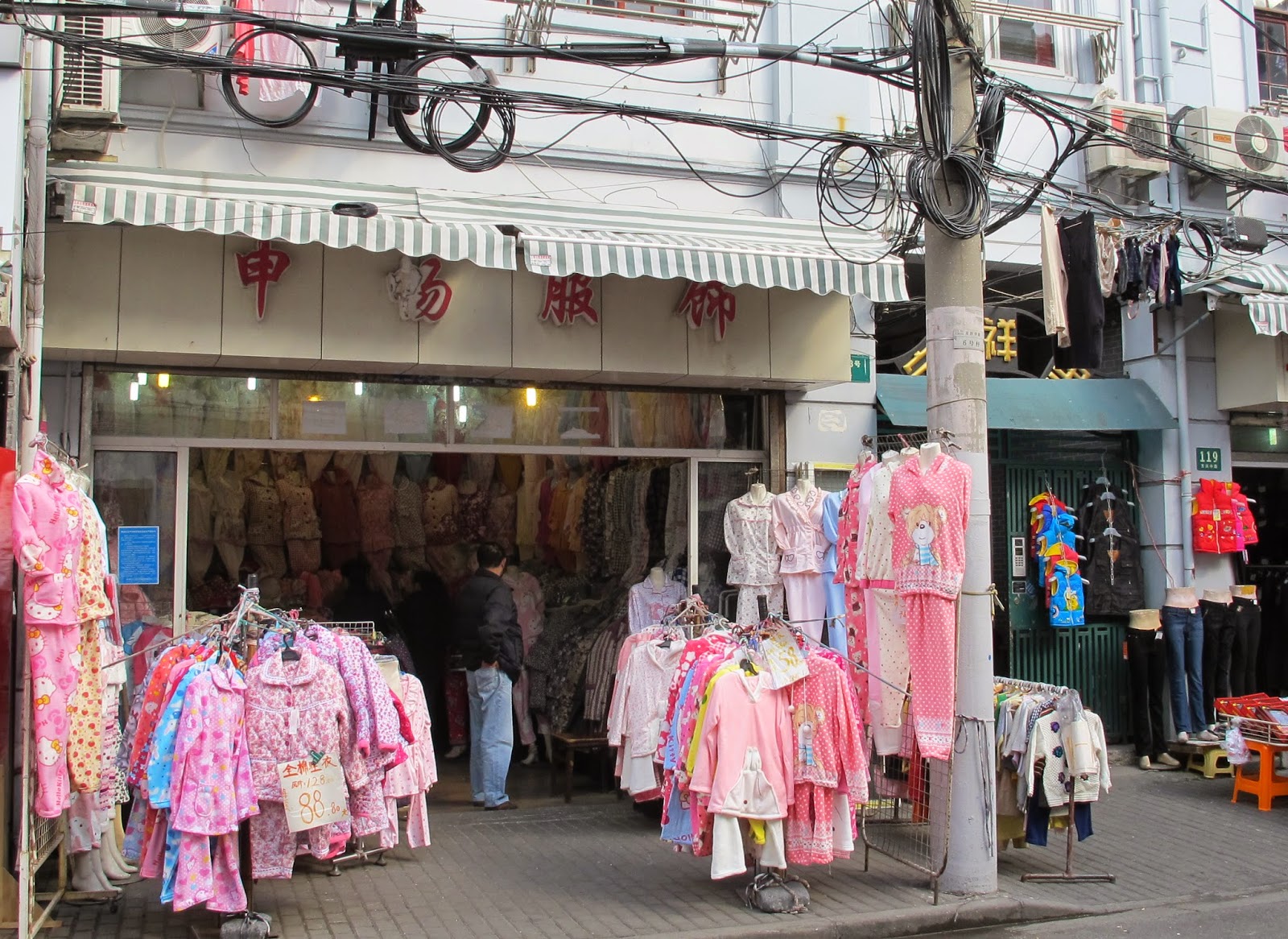 In Beijing it is rare in most places outside the diplomatic area or 798 to see another Westerner - Shanghai is much more ethnically diverse. On my very first visit to this city in 2011, after spending a month in Beijing, I was surprised to see mixed race couples. This is generally a Western man with a Chinese woman, almost never the other way around. My young postgrad student translators, however, (mostly girls) talk to me about the pressure from their parents to find a good Chinese husband. In Beijing last week "Shirley" told me that every time she returns home to Shanghai her mother sets up  a series of blind dates with eligible bachelors, worrying that she is leaving it too late. She is 22. She thinks her mother chooses a "better quality" man than the rock musicians with whom she has had disappointing romantic experiences, and says she would never, never marry a man that her parents disapproved of. "Family is the most important thing of all," she says, and as an only child she must not disappoint the parents who have lavished her with love and educational opportunities. 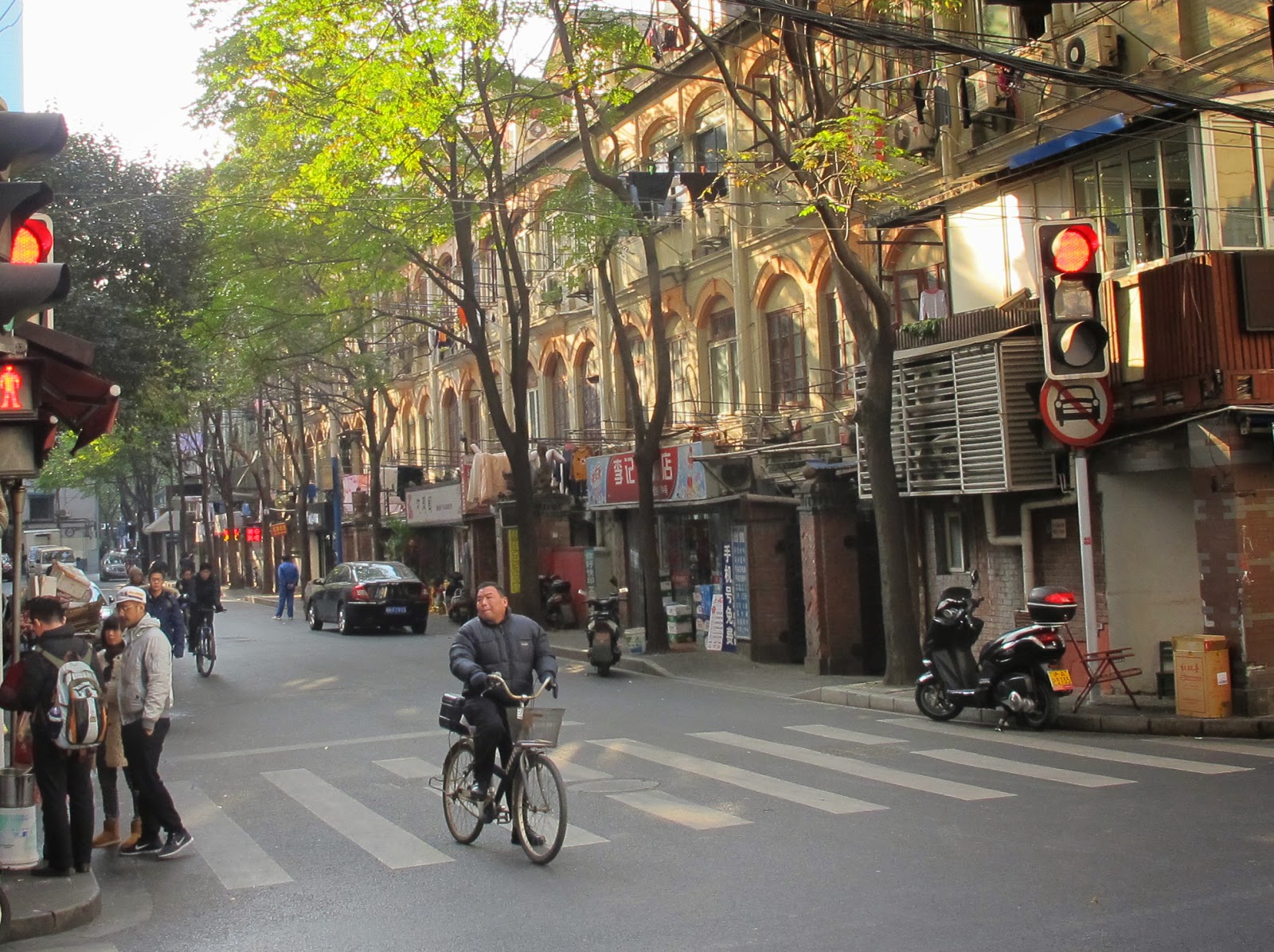 Since I arrived in Shanghai I have had a fascinating conversation with independent curator Shasha Liu about the Chinese art market in the odd surroundings of the Marks and Spencer coffee shop - more of that in a later post. Two artist studio visits took up my first two days - the first an interview with young sculptor Yu Ji, whose work is currently showing in the Palais de Tokyo in Paris. She is pushing sculpture into the realms of performance art, and she won my heart when she confided her early love for the work of Wolfgang Laib. I later discovered she has worked with Grass Stage Theater Director and art historian Zhao Chuan whom I interviewed with his wife, the performance artist Wu Meng, back in 2012. There is a distinctly more theoretical approach - and perhaps a more polemical one too - to art practice in Shanghai as compared with Beijing. Yu Ji is interested in the body in quite an abstract way - her work is not about sentiment or feelings, but explores the body taking up space, moving in space, and the experience of physical sensation. 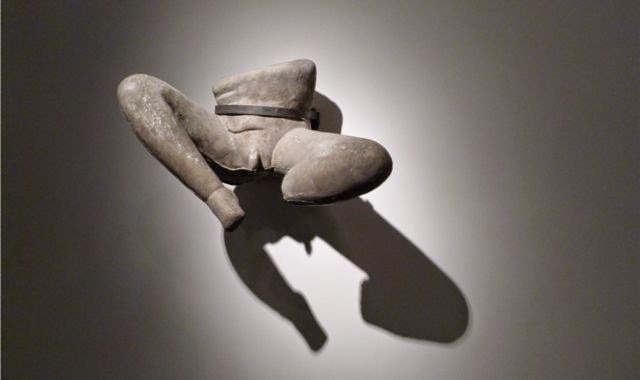 An early work in her student days started with the used bars of soap with which a range of different people had washed their bodies. Yu Ji made plaster casts of these worn and humble objects. Arte Povera interests her - the use of simple inexpensive materials such as concrete and plaster. This has been partly out of necessity, as a student and then as a young impoverished artist just beginning to make her way, but it is also a distinct aesthetic and conceptual choice. It is something seen in the work of other Shanghai based artists, too, such as Shi Qing, and again represents a distinct contrast with the grand ambitions and enormous scale of many Beijing-based artists. Yu Ji loves the amputated limbs and battered torsos of Classical sculpture from the ancient world, and was also inspired by the Buddhist statuary of the Mogao caves along the silk route. She is interested too in the connection between art and daily life, and one of the works currently showing in Paris is based on the very particularly Chinese experience (outside the big "first-tier" cities) of the communal public toilet. For more about this interesting sculptor you can read my forthcoming article about ten interesting emerging Chinese artists in The Culture Trip!

My second interview was with painter Wang Zhibo, whose work was seen in Sydney this year in "Wondermountain" at Sydney's Penrith Regional Gallery, an exhibition curated by Joanna Bayndrian. She selected contemporary artists both Chinese and Australian who draw in some way upon the traditions of scholar painting and "shan shui" ink and brush landscape painting. You can read my review of that exhibition if you click HERE. Zhibo lives and works in Hangzhou, so I had a grand Chinese travel adventure, leaving my hotel at 7.00am in order to get to Hangzhou's West Lake with at least a little time for a walk around its famed circumference before going to the studio she shares with her husband,  painter Yuan Yuan. The visit was worth it in every way - these highly landscaped vistas punctuated with red maple leaves and willows drooping into the water are so reminiscent of Chinese painting. I loved it despite the battered vans tearing around the lake with tourist touts screaming out the windows into hand-held loudspeakers, and hordes of people taking photographs of their wives and daughters leaning winsomely against trees or looking flirtatiously through pavilion windows.
My conversation with Wang Zhibo took place amidst the constant noise of drills and jackhammers, as the old factory area is being "upgraded" to become fancy expensive design studios, shops and galleries - "like a little 798" said Zhibo. Her work is cool and metaphysical, dealing in imagined and remembered landscapes which blend east and west, past and present. She is currently working on a series of paintings of security guard houses (like those in the gated estates of the newly wealthy Chinese, always given grandiose names such as "Florida Heaven" or "European Mansions") sited in imaginary gardens inspired by Renaissance painters such as Botticelli. I like this idea, which combines whimsy with savage satire. Zhibo loves Masaccio and Piero della Francesca for how they make the difficult appear easy and inevitable, and there is a similar cool architectural eye on the world in her own work. 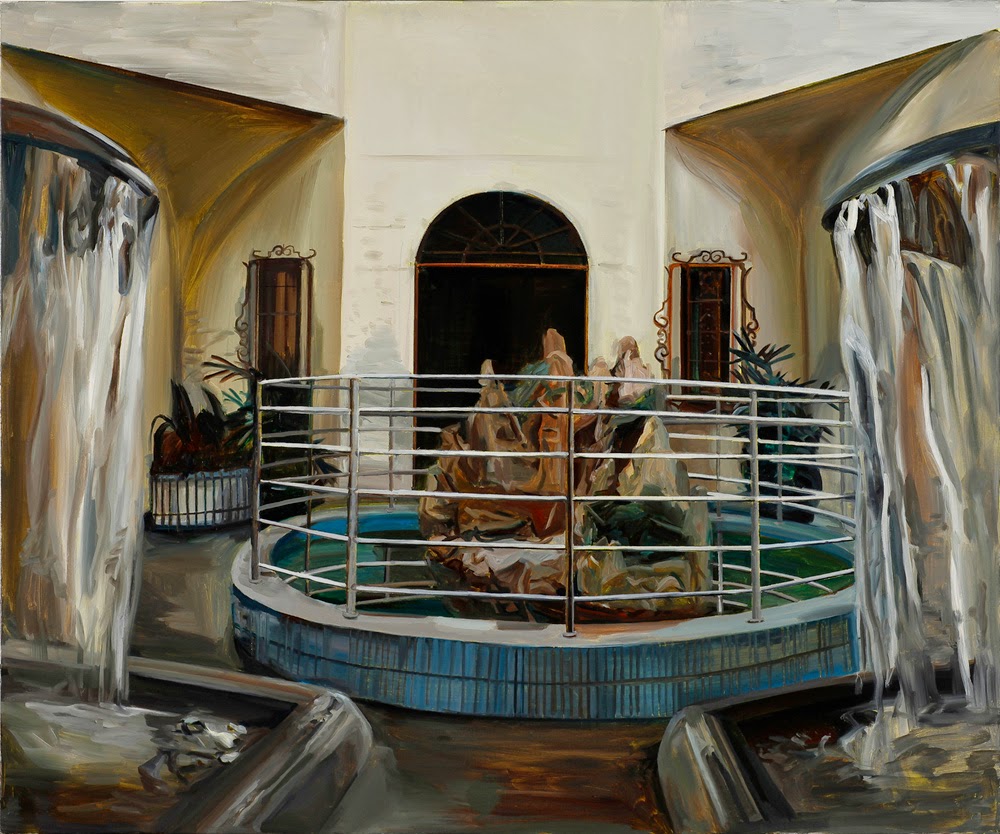 After two hours talking with Zhibo and her young assistant, Bing Er (studying English languageat university but desperately wanting to be a photographer and work with Yang Fudong) came an exhausting trip back to Shanghai. Firstly a cab from studio to station with, as is usual, no suspension. The cheerful driver made up songs for me based on our stilted conversation. Sample words, translated from the Chinese: "Hangzhou traffic is terrible every day, every day, every dayl Traffic jams every day, traffic is shit!" Then he would turn to me and say, "Hao bu hao?" (Good or not good?) "Very good!" I assured him, hoping we would eventually arrive unscathed at our destination, which seemed more likely if he faced the road than swivelled around grinning at me. Then almost an hour in the grim, very cold waiting room of the railway station. Then an hour on the fast train, on which many people were standing, as they had sold more tickets than seats, with a man snoring more loudly than I would have believed possible next to me. Then one hour and ten minutes in a taxi line at Hongqiao Station, into which a Russian woman in a fur coat pushed ahead of hundreds of people and leaped into a cab with her child.Nobody protested. I wanted to punch her. Then 50 minutes in the taxi crawling through the stalled traffic, interspersed with burst of maniacal speed and heart-stopping near misses. Like so many of my China days, it was exhausting and wonderful at the same time. If only the mythical revolutionary martyr Lei Feng, who is like a socialist saint in China, much satirised by cynical youth,  HAD been there to help me get a taxi, as this sign in the railway station appeared to promise.... 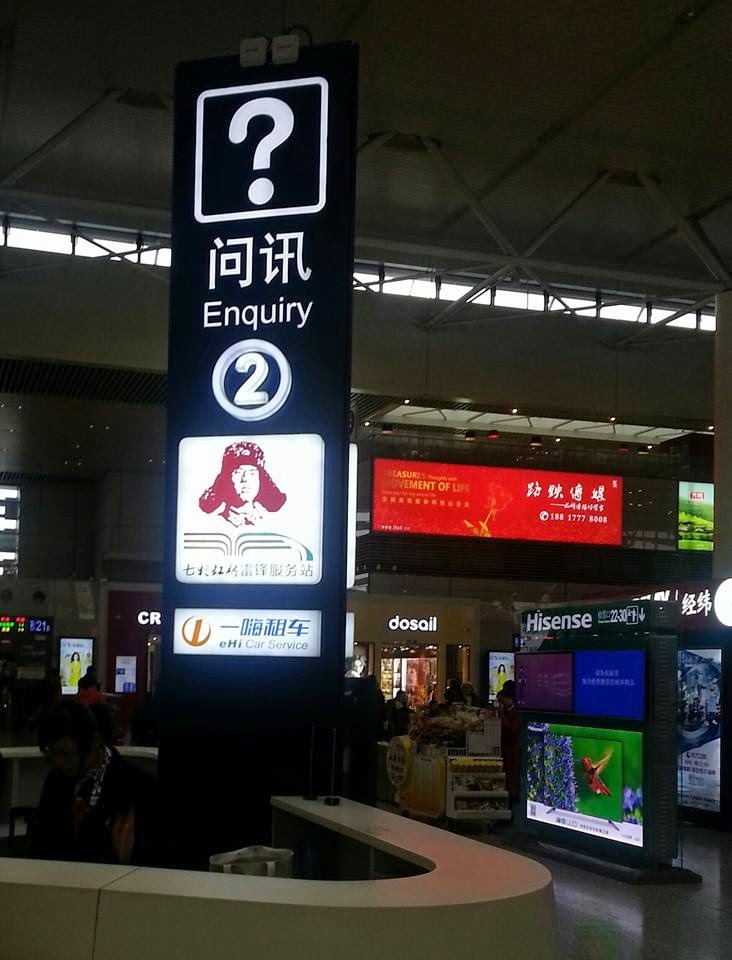 More on Shanghai art, and more of my random #OnlyinChina observations in a later post. Off to the Shanghai Biennale now, followed by more art, as much as I can cram into the day. I will give a few museums a miss, though, including the mysterious but terribly dull-sounding "Exhibition of Deeds of Good Eighth Company of PLA on the Nanjing Road." 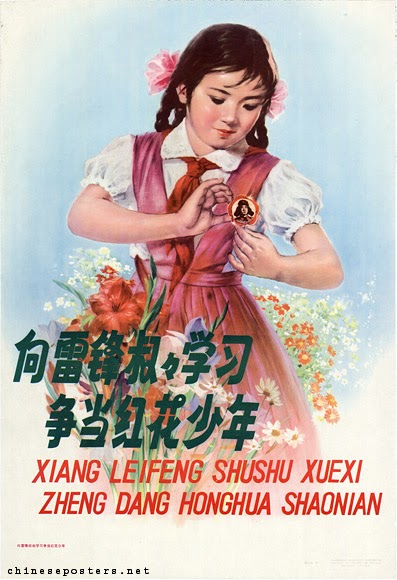 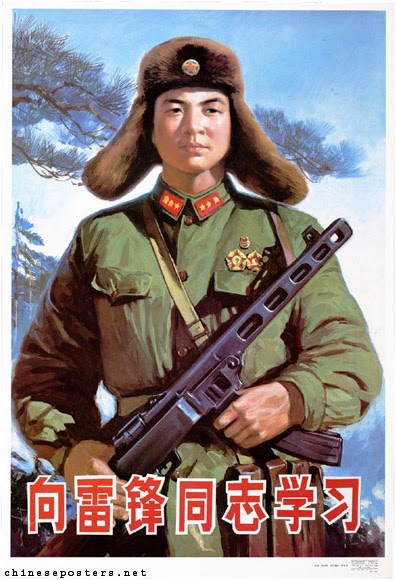 Study Comrade Lei Feng, 1990
From Chinese Posters site: The following example from early 2001 may serve as an illustration of the continuous redefinition of Lei's exemplary status. Falun Gong members undergoing "re-education through labor" were taken to the Lei Feng Memorial Hall in Liaoning Province, in order to learn from Lei's self-sacrifices. According to the report in the Liberation Army Daily [Jiefangjun ribao], the visitors "spontaneously repeated and copied down inscriptions" from his diary.

Posted by An Art Teacher in China at 4:55 PM