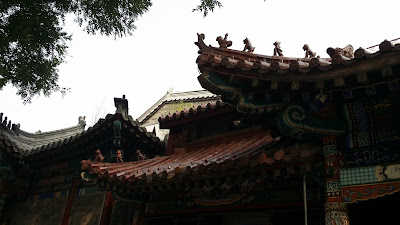 I've left Beijing and I'm already missing it. Like many, both Chinese and non-Chinese, I have a love/hate relationship with that big bad city - I am already breathing a little more easily after 24 hours, but the "Beijing cough" is still with me. Each time, I leave with a sense of regret for all the exhibitions that I didn't have time to see, the places I didn't have time to explore, and the fluency in speaking Chinese that I failed to achieve. The month-long immersion certainly helped, although my language skills are still woeful. I am in Hong Kong now, and still stopping myself in taxis, shops and restaurants from speaking Putonghua, which does not generally go down well here, where tensions between Hong Kong citizens and mainlanders are high. I feel as if my brain is divided in two - one section is thinking in Chinese (slow, clumsy, yet definitely improving) and the other half is English. And there are just so many words and phrases where the Chinese seems more on-the-money, so a creole mixture is often spoken by expats. To feel a bit unwell is to be "bu shufu" - much more descriptive! Something annoying or troublesome is "mafan", and to do anything immediately (unlikely in China) is "mashang", literally meaning, "on horseback". Something so-so is "ma ma hu hu" (horse, horse, tiger, tiger) although I suspect this is a phrase more said by foreigners than by Chinese. And then there are all the fabulous 4 character idioms, or Chengyu, that in translation can be poetic (三人成虎, Three Men Make A Tiger, or if something nonsensical is repeated enough it is accepted as truth) or rather earthy. Something completely pointless or a waste of time is "like taking your trousers off to fart." New slang, too, usually spread via the internet, is often very revealing: a desirable woman is a "bai fu mei" (white rich pretty.) The insistence on whiteness is evident in the number of skin whitening creams sold in pharmacies, the use of umbrellas to shade your face from the sun, and in the universal contempt shown to the "nongmin" or country-side people (the peasants in the old socialist etymology). At an artist's studio in the mountains outside Chengdu his female assistants from the local village crowded around me exclaiming over the whiteness of my skin (and no doubt my white hair too!) And riches - to reverse the famous Jane Austen line, it is a truth universally acknowledged that a man in search of a wife must be possessed of a good fortune. And all the better if her family is rich too.

On the plane from Beijing to Hong Kong, I began reading The Porcelain Thief, the tale of an American Chinese journalist's search for the treasure trove of porcelain buried by his great grandfather before the family fled the advancing Japanese army, eventually ending up in Taiwan, then the United States. A bemused first-time traveller to Shanghai, he encounters the anarchy of the roads with a description that made me laugh in recognition. Each time I come to China (and in the last 2 years I have spent 5 months in the neighbourhoods of Tuanjiehu and Dongzhimen) by the second week I have forgotten all about the existence of seatbelts and have stopped flinching when taxis change lanes suddenly, forcing their way into non-existent gaps in fast moving streams of traffic. When I return to Sydney I have to remind myself to wait for the lights to change, to indicate when I change lanes, and not to just walk out into the traffic and expect that it will flow around me if I hold up one hand.

Here is Huan Hsu's description, so accurate that it's worth quoting the full paragraph: "Though the taxi fleets boasted high-tech touch screens built into their headrests with a recorded message reminding passengers (in English) to wear their seat belts, none of the taxis had seat belts in their back seats...City buses swerved into oncoming traffic and cut across two lanes to make their stops. Drivers used their horns so liberally that expats joked about it being the Chinese brake pedal. Drivers could, and did, disobey every explicit and implicit traffic rule on the books. Police, fire and medical vehicles enjoyed no special dispensation on the roads; nor did police seem interested in pursuing reckless drivers. It was common to see cars stopped in the middle of a freeway, crossing elevated medians, or driving long distances in reverse after they'd missed an exit, and in each case the rest of the cars simply purled around the offender like a stream around a boulder. The streets follow a design that can only have been created by someone who didn't drive. (The use of headlights was actually prohibited in China until the mid 1980s, when officials began going overseas and realised it was the norm.)" And now in Beijing, where the Lamborghini showroom on Xindong Lu also has a private plane in the window, the "Fu Er Dai" (second generation rich) drive expensive cars with utterly reckless abandon, often whilst talking on their cell phones, with an attitude of contempt for every other vehicle and pedestrian on the road.
I already miss Beijing but love Hong Kong too. English writer Fuchsia Dunlop memorably described is as like a "decompression chamber" for those returning to the west from China. Despite the increasing glitziness of the island - how many Gucci and Prada shops can one city possibly accommodate, and does anyone actually buy all this expensive crap? - I am always charmed. I love the rattly trams and the Star Ferry, the chaotic tumbledown streets around Yau Ma Tei and Jordan, and the flocks of schoolgirls in white dresses with coloured belts who fill the streets and MTR stations in the late afternoons. I like the "sitting out places" - tiny oases of calm in a frenetic city - where men sleep on benches with their shoes neatly arranged on newspaper beside them. I like the unexpected Buddhist shrines next to shops, under stairways and under the overpass on Canal Road. Today in the Nam June Paik exhibition in the hushed and tony surrounds of Gagosian Galleries, a cleaning lady bowed with folded hands in front of one his TV Buddha installations. 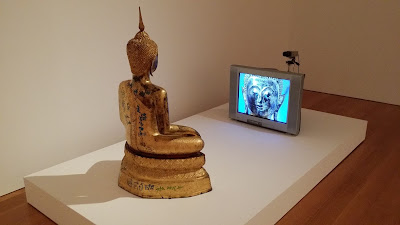 Each time I arrive from the mainland and see people actually waiting for traffic lights to turn green before they cross the road, I experience a slight shock. Entering a subway car is no longer a life-threatening push-and-shove survival of the fittest, people stand to one side on escalators and actually line up in shops and banks, and nobody is coughing up phlegm and spitting it onto the footpath directly beside you. It's a relief, and yet....

It's the sense of unpredictability in China, the sense that everyone is making it all up as they go along (and in the case of many drivers, that is exactly what they are doing) that is also the source of dynamic entrepreneurialism, creative energy and optimism. People reinvent themselves continually - from the rural teenagers travelling to the factory towns for work to the artists trained in one medium who decide to do something completely different and unexpected working in another. It's that sense that anything is possible, that anything can happen - and probably will - that makes me love China despite all the very real difficulties and the increasingly worrying crackdown on human rights lawyers, activists, journalists and NGOs. The artists' villages - Caochangdi, Heiqiao, Hege, Songzhuang, Feijiacun and Beigao, not to mention others so new that I haven't yet discovered them - are seething whirlpools of creation. Not everything is fabulous, of course, how could it be? But in a converted barn-like space in Songzhuang I found Li Hongbo working on his miraculous expanding paper sculptures for his New York show; in Heiqiao Liu Zhuoquan spoke of his plans to create an installation of more than 6,000 of his "inside bottle" paintings; and I met Wang Lei in a 798 cafe on my way to the airport for my flight to Chengdu. We spoke of his use of Chinese and English dictionaries sliced, shredded and spun to become a textile-like material that can be "knitted" into imperial robes. I told him he reminded me of the dark fairytale where a girl is kidnapped and forced to spin straw into gold - a metaphor for the alchemy performed by each of these artists.
In Hangzhou Jin Shi talked about his wonderfully witty yet poignant sculptures, creating the tiny spaces and makeshift worlds of the rural migrant workers who are building this "new China". In Shanghai Yang Yongliang explained his technique of working with thousands of photographs of the cityscapes of Chongqing and Shanghai in order to create his magically animated versions of  "shan shui" ink paintings. In Chengdu I spoke with Shi Jindian in his house up in the mountains about his intricate, painstaking reproductions in wire of mechanical and natural forms. In her converted Yuan Dynasty temple studio and living space in Beijing, Bingyi had just returned from an early morning photoshoot - she is working on a project that will combine film, drama, poetry, music, still photography and ink painting as a record of the lives and experiences of those living in the last, endangered traditional "hutongs" or courtyard houses of old Beijing. These are just 7 of the more than 20 artists I interviewed in the last month. Each represents an aspect of the vitality of contemporary Chinese art, and the ways in which many Chinese artists are adapting traditional forms to create a contemporary language. These are global artists - their work, and in many cases the artists themselves, regularly criss-cross the globe, participating in group and solo shows and Biennales in Venice, Paris, New York, London and Moscow. Yet their work remains distinctly Chinese.

The first time I went to China I realised I was witnessing something extraordinary and historically significant, and that feeling has only grown stronger in subsequent years. In the last five years I have seen dramatic change, and understood just a glimpse of the disorientation felt by Chinese people, especially those of an older generation. One artist, explaining his refusal to answer any questions about his youth, said, "I have experienced all of recent Chinese history, and it is all terrible." The pace of change is relentless, a source of both distress and excitement: the Chinese paradox. There is of course a chengyu for every occasion. "One Day A Thousand Autumns" (Yi Ri Qian Qiu) meaning that change comes so swiftly that it seems a thousand years passes in one day, fits the bill here: