The grey is back. After a few glorious blue sky Autumn days, by late this afternoon the sun was an ominous red disk in a murky sky and people were wearing masks once again. Some young women are sporting masks with lace trims and floaty chiffon wisps that trail over their faces like an orientalist fantasy yashmak from "I Dream of Jeannie". The general disquiet about air quality doesn't extend to cigarette smoke though - I talked with an artist yesterday afternoon while he chain smoked for two hours. We sat in front of his expensive air purifier.

Despite the clammy metallic air, this evening on my way back to my hotel I saw that people were still eating stacks of dumplings and chuan'r (skewered lamb - maybe!) at roadside tables outside Mr Shi's Dumplings and children played around all the apartment compounds. Two pigtailed girls on the backs of their mothers' bicycles sang at the tops of their voices. Elementary school kids in red Young Pioneer scarves rode home on the backs of motorscooters, or in some cases up front while a baby was carried on the back. No child is strapped in anywhere, I note, and most babies are carried in arms - it seems that prams and strollers are accessories of the very upwardly mobile. Babies seem generally contented and are rarely fretful, I would think as a result of the constant cuddling and contact. But I won't romanticise; twice in one week I have seen parents chasing wailing small children down the hutong, threatening them with a broom. Babies are everywhere I look, although statistically few city people have taken advantage of the relaxation of the One Child Policy - raising a child in Beijing or Shanghai is expensive.

High schoolers in their shapeless brightly coloured track suits loitered - loudly - at the snack cart on the corner, in the time-honoured tribal ritual behaviour of teenagers everywhere. The bicycle repair lady was having a shouted altercation with a customer, and motor scooters and tiny tin can "beng beng" taxis wove their way in and out of the traffic, often driving on the footpath. Bicycles are often left unlocked, casually leaning on their stand or lying on the ground, although everyone has stories to tell of stolen bikes. People ride whilst smoking, and making calls on their mobile phones. One night I crossed the road at around ten thirty and saw a most beautiful young woman, like a young Gong Li, black plait flying in the wind, riding high above the traffic seated on a giant stack of recycled cardboard, while her husband pedalled the three wheeled vehicle carrying it all. She looked like a goddess, surrounded by every imaginable kind of wheeled vehicle.
In addition to my continuing attempts to learn the language (tilting at windmills, that!) and interviewing artists for a new book project, I am also trying to see as many exhibitions as possible. Here in Beijing I enjoyed the show of young emerging artists at Red Gate Gallery, 'Surge',  (more about that in a later post.) I found very slim pickings in the once-exciting 798 Art District, but was interested to see Liu Xiaodong's paintings from his time in Mongolia, recording the encroachment of urbanisation. I loved the David Diao exhibition at Ullens - he is an artist I now want to know much more about. An emigre to Hong Kong as a child, and then a participant in the New York artworld in the 1970s and 1980s, his works are visually and conceptually exciting. Sardonic links with the way Abstract Expressionists appropriated Chinese calligraphy as pure mark-making, in particular, interested me,as did his constant referencing of Malevich.


I reviewed the show at Ullens Centre for Contemporary Art by emerging video artist Tao Hui, who has just won a major prize at Video Brasil, for Daily Serving. You can find the link to that article HERE. At the Arte Nova Art Fair (held in the spartan Soviet style surrounds of the Agricultural Exhibition Centre) where ten galleries had each been asked to select ten artists, I enjoyed the woven ribbon works of Dai Dandan, and an installation by Li Lin of tiny, old school desks, with an imaginary landscape like a tiny diorama contained within the space under the lid of each one. Completely charming and surreal, they reminded me a little of the exquisite miniature worlds inside shopping bags created by Yuken Teruya. 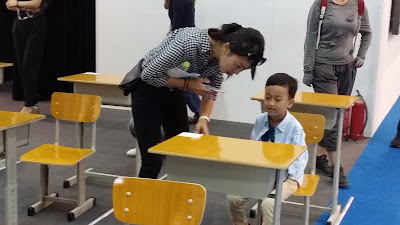 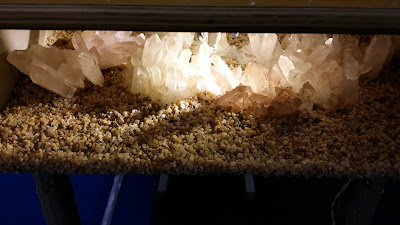 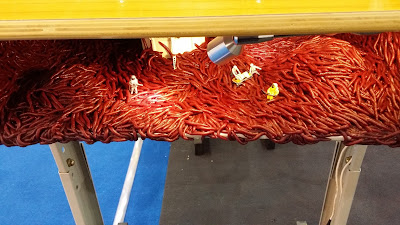 Also highly memorable was an installation of classical black marble busts whose heads had been replaced by twirling, moving gilt mechanical toys. Nightmarish and intriguing. 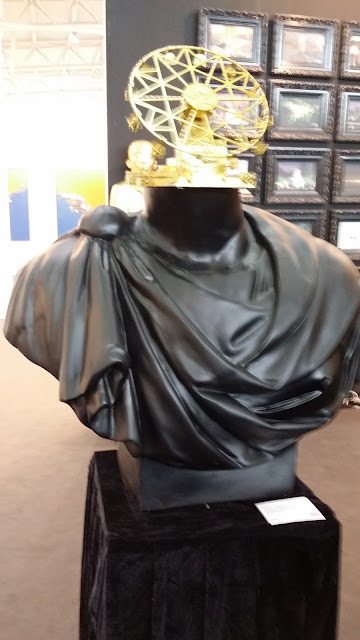 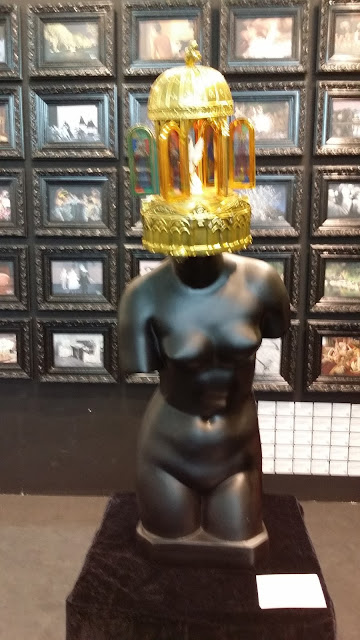 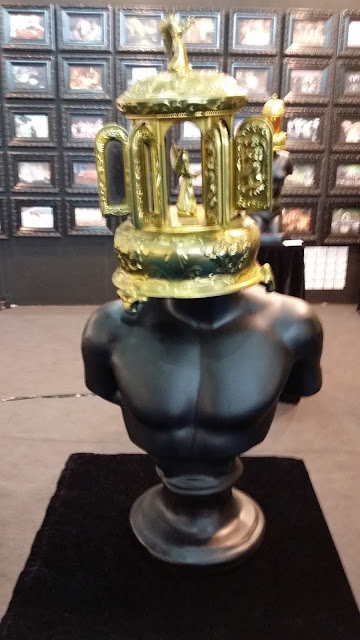 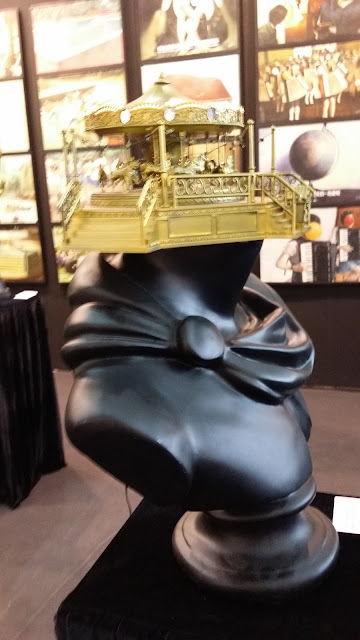 In my visits to studios, in Shanghai, Hangzhou, Chengdu as well as Beijing - 18 so far with more to come - I have had fascinating encounters with many artists, including Wang Guofeng and Wang Qingsong on the eve of the opening of the Beijing Photo Biennale at the CAFA Art Museum, Qiu Xiaofei preparing his show for Pace New York next year and reflecting on his childhood in far north, frozen Harbin, Bingyi and Bu Hua (both of whom feature in my book about women artists in China) and Liu Zhuoquan who is thinking about his exhibition in Melbourne next year and planning a new installation project of more than 6000 of his painted bottles. Liu says he thinks of his bottles as a library containing everything in the world.
In Shanghai I was interested to see the exhibition of women artists at Pearl Lam - and delighted to see that it included Zhou Hongbin, who is included in my book 'Half the Sky', and some beautiful and lyrically evocative video works by Yang Fudong at the Yuz Museum, but the highlight was at Rockbund. I was moved and overwhelmed by the Chen Zhen exhibition, "Without Going to New York and Paris, Life could be Internationalized". Paris-based, in the last ten years of his life Chen returned to his native Shanghai over and over again, recording and representing the extraordinary and tumultuous changes his city was undergoing. The resulting installations are dramatic, theatrical and poetic. I wrote about the show for Daily Serving:

Chen Zhen, who died (much too young) in Paris in 2000, was a significant artist with a hybrid Chinese and European identity. Although after 1986 he essentially lived and worked in Paris, his personal history and deep cultural roots lay in China, and specifically in Shanghai. From the mid-1990s he returned over and over to a city on fast-forward. Shanghai was undergoing a massive, controversial transformation, in the process of becoming the global megalopolis it is today. The current exhibition at Shanghai’s Rockbund Art Museum presents works from this period, which curator Hou Hanru explains reveal a balance between Chen’s examination of a dramatic external reality and a conceptual criticality. Sometimes witty, sometimes profoundly beautiful and melancholy, Chen Zhen’s works are steeped in his identity as a Chinese artist at a historical “tipping point.” As the artist said in his online project Shanghai Investigations, “without going to New York and Paris, life could be internationalized.”

Chen Zhen. Purification Room, 2000-2015; found objects, clay; approx. 850 x 1100 x 450 cm. Courtesy of Rockbund Art Museum and Galleria Continua, San Gimignano/Beijing/Les Moulins.
Entering the Art Deco spaces of the Rockbund Museum, visitors encounter the rather spectacular Purification Room (2000–2015), a large space filled with everyday objects—sofas, TVs, chairs and tables, bicycles and shopping trolleys—all entirely coated with mud, as are the walls and floor. Traditionally, Chinese medicine used mud to cleanse and detoxify, and Chen Zhen thought of it as representing purity, simplicity, the natural world, and the peace of being laid to rest. The experience is one of stillness and silence, as if we have entered a mysterious unknown civilization revealed by an archaeological excavation. The quotidian artifacts of our modern daily lives seem to have a greater significance, becoming unfamiliar and strange.

Click HERE to read the rest of that review.

And read my next post to find out about Huang Yong Ping at the Red Brick Art Museum, Ai Weiwei at Galleria Continua, and more!

Posted by An Art Teacher in China at 7:09 AM