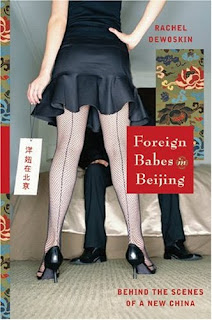 I have been reading a book with the (apparently) ridiculous title of 'Foreign Babes in Beijing'. It cost $2 in a remainder bin (clearly not helped by the cover design) but turned out to be an excellent find for my growing collection of books about expats in China - who knew?


"Foreign Babes in Beijing" was the title of a huge hit Chinese TV series in the 90s, right on the button of the zeitgeist in the middle of the 'opening up' period. At its height it was watched by 600 million people every night - that is a statistic that is truly mind boggling and comprised 10% of the world's population, according to a review of the book in the Columbia University Alumni magazine. I have just watched the opening credits and an extract of one episode on Youtube and it is, as you might expect, and as the author of the book cheerfully acknowledges, hilariously bad. For example:


So - you get the picture. Not intellectually demanding television.No subtlety in either script, direction or acting. It would seem the director was aiming at a Beijing version of 'Friends', including the catchy 90s theme tune - and very big 90s hair on the western girls.


The author and narrator is Rachel DeWoskin, who was working for an American PR firm in Beijing and was approached to audition for the part of one of the 'foreign babes' who begin relationships with Chinese men. She recounts her utter bemusement as fame overtook her. When the show started filming she was still struggling with basic spoken Chinese, and even more acutely struggling with the cultural incomprehension that is accentuated by the lack of a shared language. When she was hired, after a ridiculous audition experience, DeWoskin needed some help with the show’s title. It wasn’t until she looked closely at a sign on the studio door that she noticed it wasn’t 'Foreign Girls in Beijing'— there were “a few extra, sexy strokes” in one of the Chinese characters. But she had trouble getting a translation from the friend who had encouraged her to audition.

“It’s not a thing you call your mother or your sister,” I suggested.
“Not your mother.”
“What about your sister?”
“I don’t have a sister.” Past-tense counterfactual hypotheticals are hard to discuss in China. I wasn’t sure why this was so, but I knew from experience that my colleagues were literal. I turned the sentence forward.
“If you have a sister someday, will you call her niu?”
“I won’t have a sister. My parents are too old.”


It quickly becomes apparent to her that the two foreign girls are cast to be the sexy 'other', the counterpoint to the 'good woman', the Chinese woman. When a friend asked DeWoskin if she thought that American women were kaifang, “open-minded,” DeWoskin enthusiastically agreed, not realising it wasn’t a compliment. “The word in Chinese was used to talk about a lack of discipline, peppered with promiscuous abandon.” At the height of her fame crowds of teenage girls followed her down the street, and into shops, buying what she buys. "Look, the 'foreign babe' is buying fish paste!"


There are many amusing anecdotes told at her own expense and the book is much better written, with greater subtlety and insight, than I expected. The show and its ludicrous scripts form the background to a subtle and nuanced analysis, written with hindsight,  of five years living in China, providing an interesting counterpoint to the many memoirs I have read by male writers. She negotiates the tricky territory of love affairs with Chinese men, female friendships, an expat workplace, a Chinese work unit (the TV studio, where she discovers that her Chinese co-star is being paid $20,000US more than she is) and all the daily challenges of renting an apartment, buying electrical appliances, and negotiating her way around a constantly changing city.


Unsurprisingly, my favourite part of the book deals with her friendship with two artists who have moved to Beijing from Sichuan Province and are therefore almost as much outsiders as the 'foreign babes'. "They were not Beijingers, and for real Beijingers, everything outside of Beijing is luohou, or backward...there are of course varying degrees of outsider status. Those of us who were not Chinese were the most dramatic laowai. Then there were the overseas Chinese, who took flak for being disloyal if they were 'too western' or not fluent enough in Chinese. Then there were the non-Han Chinese from China, called 'ethnic minorities', who were celebrated in public, at dances and exhibitions, but controlled by the government in private. Zhou Wen and Zheng Yi (the two artists from Chongqing) were Han Chinese, but from the south; they were as foreign as Texans in New York."


In the final episode of "Foreign Babes', Jiexi and her lover Tianming are about to leave for America. His father's parting words to him: "Don't let China lose face".
Posted by An Art Teacher in China at 2:18 AM