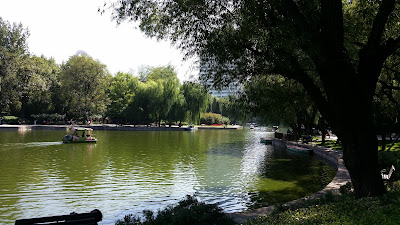 I began writing this post sitting on a bench beside the lake in Tuanjiehu Park. A young woman on the next seat was playing a recorder, rather sweetly, and her grandmother was singing, competing with all the erhu players (like strangling a cat), Chinese opera singers (amplified, likewise), and men listening to very loud radios. Pleasure boats puttered serenely past on the green water, occasionally colliding with each other (Beijing driving being as bad on water as on the roads) and families strolled in the sun with children eating fairy floss and carrying balloons. Mothers strolled arm-in-arm with adult daughters, older dutiful daughters pushed their mothers in wheel chairs around the park, and grandmothers doted on ridiculously cute babies. The old men played cards in the pavilions under the willow trees, slapping them down violently with cackles of hoarse laughter and shouts of triumph or anguish. Red lanterns hang from the trees. All of life is here. 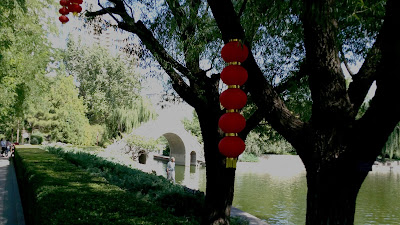 On this extended holiday weekend the tree-lined streets of my old stamping ground of Tuanjiehu are especially lovely. The apartment buildings have been spruced up with fresh paint and new windows, and all the small food shops are doing a roaring trade. Today, it's easy to forget what an unforgiving brute of a city Beijing can be, particularly in the viciously cold Northern winter. Then it is grey and bleak, the traffic is beyond appalling, and if you stay here long enough the air will kill you. Quite possibly literally. Even in the Autumn there are definitely some unloveable aspects. The day I arrived, in drizzling rain, I went for a walk in the local streets. The sound of people hawking and spitting is a Beijing feature, as is the unmistakeable miasma arising from the drains - Beijing after all is a city where you cannot flush used toilet paper (except perhaps in brand new 5 star hotels) lest some unspeakable and truly disgusting plumbing catastrophe occurs. Since my last visit 8 months ago there are non-smoking signs everywhere - a new government policy, initially with popular support and now generally hated. Naturally enough these rules are essentially ignored, and you still find people smoking in cafes and bars, and in the streets everywhere. I spent two hours talking with an artist who smoked cigars throughout our conversation.And yet.... something makes me feel almost completely at home here.

Back in my hotel now, outside my window late afternoon shadows are falling across pink apartment blocks, the sky still blue. Despite the public holiday, traffic noise is constant - Beijing drivers honk their horns continually as a preemptive strike, often to indicate they have no intention of obeying traffic lights. It's a warning to pedestrians - get out of the way or prepare to die. I hear the squeaking sounds that indicate a "san lun che", a three-wheeled vehicle used to transport everything around the city, from loads of recycled paper to pizza deliveries, and the noise of the straw broom that someone is using to sweep fallen leaves into the gutter. Around the corner from this hotel, behind the glittering shopping malls that are metastasizing all over the city, in a traditional hutong of tiny shabby grey dwellings, the busy lives of Beijingers continues as it has since before the establishment of modern China. As I wandered through its narrow lanes to the main road women stopped and smiled at me, and some glanced up from their games of cards to say hello. 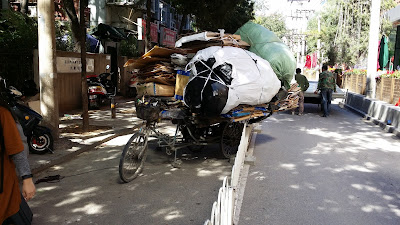 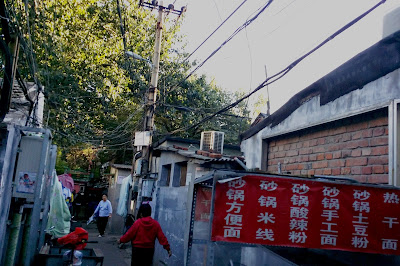 Each morning I walk to my language school. I am slowly, slowly, imperceptibly improving; now at the point of walking into things in the street as I am always trying to decipher Chinese characters, sometimes talking to myself like a madwoman. "Ah, Beijing Roast Duck!" I say. "Hospital!" "Park"! "Taxi Rank!" I have two teachers - one talks in a fast flood of Chinese which I listen to with desperate concentration and muster up stumbling replies to her questions. Her conversation is really interesting, and I love her stories of growing up in the '80s, at the start of Reform and Opening, when Beijing was all bicycles and all clothing was blue or grey. I listen so hard that my brain literally hurts. However, she finds it hard to disguise her incredulity at my inability to remember new characters from one day to the next, try as I might. The other teacher likes to show me pictures from her favourite1990s TV series about the Tang Dynasty, tell me which actresses "do not have a good reputation", and I wince every time she says, "We have a Chinese joke about this...." - humour being one of those culturally determined things that, generally speaking, does not translate well. I laugh insincerely and say, "Ah yes how funny, let's return to the textbook."

In order to get to these somewhat demoralising classes I meander through the eclectic mix that is central Beijing. My journey goes something like this:

I cross the road, ignoring the Beijing taxis touting for business (motor-scooters with a tin can box-like cabin on the back, cheaper than an actual taxi but necessitating haggling, never my strong point) past the Sichuan hotpot restaurant and numerous massage and tattoo establishments, a sex shop ("Since 1995!") and tiny hole-in-the-wall noodle and baozi restaurants towards a series of glitzy malls (some almost empty). Down one street the crazy tangle of electric wiring so typical of Beijing has come adrift and wires hang onto the footpath next to an Elementary School, presumably not live since I caught my foot in one, tripped over and am still here to tell the tale. But anything is possible - on the corner, near children playing, a worker was using a blowtorch without any protective gear at all. Occupational health and safety no big thing here! 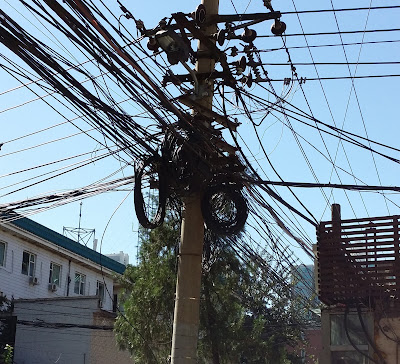 Along Gongti Bei Lu and past the Soviet statues outside Workers Stadium I see women practising Qi Gong and boys on skateboards. Young men in suits lounge with cigarettes and smartphones, and a few old men in Mao suits and cloth shoes shuffle past. Flower beds are planted with red and yellow flowers, red lanterns hang everywhere, and the Chinese flag is hanging from most shops and apartment buildings in honour of the national day, commemorating the establishment of the Peoples Republic in 1949. An old lady sits on a folding chair, her red armband proclaiming her a volunteer to keep public order, outside the Vape Shop ("Enjoy Vaping Life!") Two young girls walk towards me, one wearing a lace mini-dress covered with crystals more suited to a cocktail party than a walk at 8.30 in the morning, and the other wears a T-shirt that says "Stay Yourself, Be A Witch, Fuck Off" (um, what?) And then I saw this: 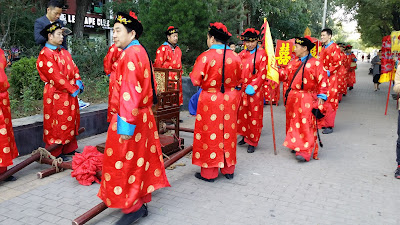 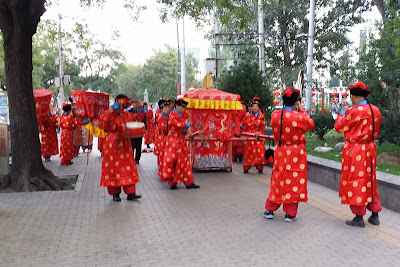 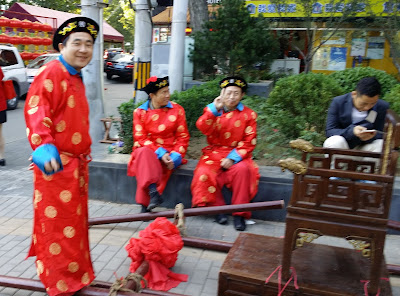 It could be a wedding in Qing Dynasty costume, but is far more likely to be a promotion - perhaps even for the nearby Gong Ti Themed Hotel (I have always thought it best not to know what this establishment involves!)

Walking home, by a different route, I pass construction sites where the walls are covered with the ubiquitous government posters featuring a cute cartoon girl reminding us of "the core socialist values." Apparently these are:


Past many tiny tailors' shops with dusty qipaos displayed on ancient mannequins, past numerous restaurants with strange western names ("Blissful Nom Noms", "Two Men and a Pie") the last part of my walk takes me down Happiness Village Street (Xingfu Cun Lu) which I decided was most aptly named once I discovered a branch of Comptoirs de France - coffee! Pastries! Bread! 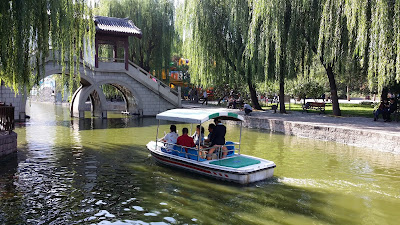 So - this is Beijing. Love it or loathe it, it's never boring. And all of that is aside from the art, which is of course the purpose of my presence here. And the contemporary art scene here is so overwhelming, so monumental, so gargantuan, that it is truly breathtaking. If the artists are to be believed (an entirely dubious proposition, some will say) at any one time there are more than 20,000 artists working in just one of the many artist "villages" that surround Beijing's far outskirts. Not all the art is good, of course, but the sheer number of practising artists, and the rigour of their training at the most prestigious of the art academies such as CAFA in Beijing, ensures that there are extraordinary things to be seen wherever you look.

You will have to read my next post to find out about my meetings with Li Hongbo, Zhu Jia and Wang Guofeng, and my thoughts about Beijing Galleries and exhibitions.

Posted by An Art Teacher in China at 6:13 AM