Not in Kansas any more!

Each time I have come to Beijing I have left the airport thinking "Well, Toto, I have a feeling we're not in Kansas any more," and this time (my third visit to this city) was no exception. The sense was even more marked, as I knew that I would be spending over two months here, living, learning Chinese, researching and writing. I arrived this week after a whirlwind two days in Hong Kong, traversing the length and breadth of the city visiting artists in their studios (of that, more in a later post.) I was initially overwhelmed by  the sense of being a  stranger in a strange land, and then suddenly, and all at once, felt quite at home. The language is a constant struggle, though, and I hate the feeling of being silenced by the inadequacy of my vocabulary. I'm forcing myself to communicate as best I can, even when it's a mixture of ungrammatical Chinese and sign language. There is enormous good will on both sides, and my stumbling sentences are usually greeted with a flood, a torrent, an avalanche of Mandarin which defeats me entirely. I understand just enough of what people tell me to grab the wrong end of the stick most of the time. This can lead to hilarious misunderstandings. I think I inadvertently told an old man in a shop today that he was good looking. He was trying on a padded jacket, and looking worried and confused, so my intention was to tell him the jacket looked good - "hao kan". He burst out laughing, saying "Shi ma?" (Really?) so I suspect that my compliment went a little further than intended. Mei shir - never mind! It afforded us both some amusement.

The men selling pancakes at a stall inside the local supermarket are extremely amused by my presence, and yell out "Ni hao, ni hao, ni hao!" whenever I walk past. I am really enjoying my interactions with my neighbours in the local area - the elderly ladies bringing home bags bulging with vegetables and eggs, and the old men walking small dogs - so many dogs! The streets and lanes are filled with the sound of children playing - so many children!
The day begins with the incredibly loud, hoarse cries of the traders at the morning market in the next lane. I was startled awake by this on my first day and wondered what on earth the noise could be - a riot? a huge sporting match? In fact, it's the sound of hundreds of people packed into a tiny lane lined with trucks, bicycles and trailers selling everything from eggs to underpants; fish and chicken feet to shoes and curtain material. The main street is lined with restaurants and food stalls - including a bakery called 'Holiland' and a KFC that serves congee for breakfast. What would the colonel make of that? Whilst most signs, labels and packaging are only in Chinese, adding to my general confusion, there is also a profusion of strange English. I have switched brands of bread, from 'Bimbo' to one called 'Mankattan' which has an American flag (sort of) on the packaging. A sign on the gate of the children's playground sternly warns that bad behaviour will not be tolerated. In fact, "anyone who breaks the laws, such as tighting, will be handed over to the police authority" and "the person who has diseases unsuitable are not allowed to play the facilities, such as heart disease, high blood pressure, epilepsy, weakness and drinking etc." 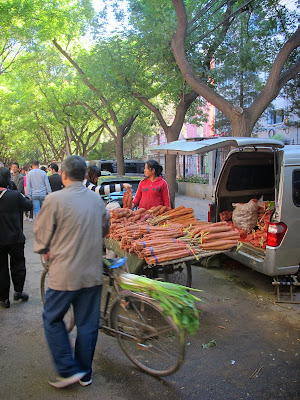 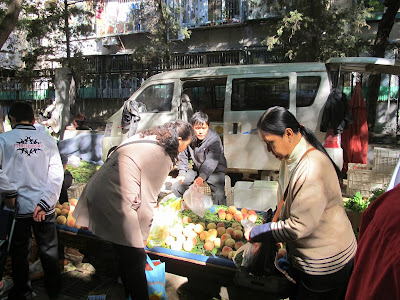 Tuanjiehu Park, further down my street, is action packed. I followed the sounds of drums and brass band instruments to find a large group of mostly elderly people singing the revolutionary songs of their youth with huge gusto, led by a woman in a vivid green jacket who alternated playing the drums with exhorting ever more dramatic singing. Later, over the bridge and past the willow trees, the pavilions around the lake were punctuated with groups of people playing traditional instruments - I am assuming the erhu, but really, what would I know? - and singing traditional songs. Such strange cadences and unfamiliar sounds. Unselfconscious dancers, people doing tai chi with swords, fans and various forms of exercise. One woman with a long grey plait walked the length of a path beside the lake kicking her legs over her head in an alarmingly painful looking fashion. Others danced together and separately. Water calligraphers were utterly absorbed in their task. And through all of this, families with tiny children made their way to carnival rides, play equipment and swan boats on the lake. I watched for a long time, occasionally stopping to ask people if they minded me taking their photograph. This request was invariably met with a big smile and an even more dramatic pose. 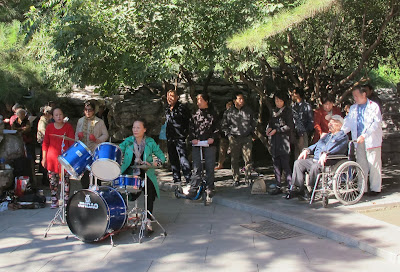 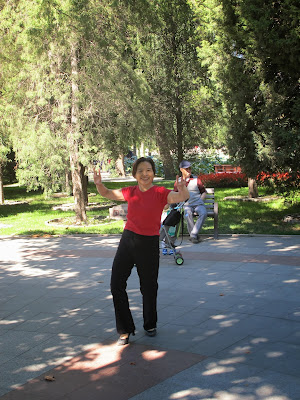 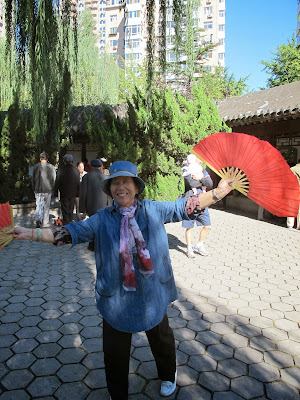 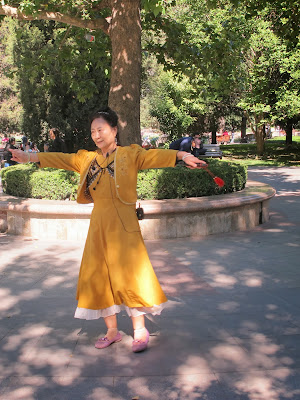 This whole panorama of leisure brought a chapter in my Chinese textbook, in which a bizarre pair of men called Mr Wang and Mr Zhou discuss their 'shenti', or well-being, and their exercises in the park, to life in a much more entertaining fashion.

The day ends with the cries of children playing outside dwindling at about 9 o'clock, and the street gradually becomes quiet. Never completely quiet, though. In a city of over 20 million people the presence of others  is always a tangible reality. 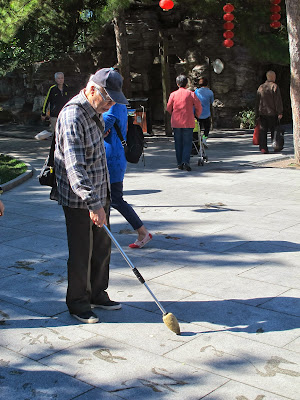 Posted by An Art Teacher in China at 7:24 AM