My favourite 'Chinglish' sign in Beijing, at least thus far, has to be this one: 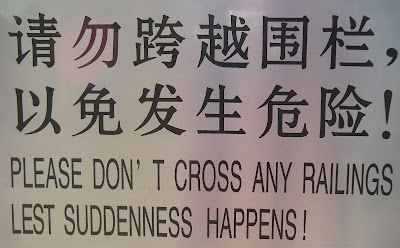 Really a lesson applicable to life in general, I feel. I had intended my next post to be about the extraordinary pleasure of starting, just a little bit, to be able to read Chinese. Just a few words, but oh how it makes the language come alive in a new way! However, "suddenness happened", and things were all temporarily de-railed. In the last fortnight, as well as my rather surreal experiences in Xi'an (more of this later) I have:
"Suddenness" indeed.

I hasten to add that the ambulance was not for me, but for a friend: an American artist who had a very serious anaphylactic reaction. The experience was alarming on so many levels. Two westerners trying to communicate with a paramedic in a grubby white coat in our limited Chinese, which in our shock and anxiety was even more limited than usual; the anxious scrutiny to make sure that materials appeared to be sterile; the discovery that we were expected to carry the stretcher ourselves; and then the coup-de-grace of finding that the ambulance was a beat-up old van with almost no medical equipment. I guess we got what we paid for - the trip to the hospital, where thankfully the treatment was excellent, cost 350 kuai.

There comes a time in any traveller's journey when either sickness, exhaustion or some mishap such as a robbery occurs. I have had all three at once, so have been feeling somewhat shell-shocked. The trip to Xi'an a week ago was surreal on many levels, not least the afore-mentioned lunch, which was ostensibly to see the work of the artist Bai Ye, on display in all the public rooms of the resort. I had started the day visiting artists, teachers and students at the Xi'an Academy of Fine Arts, meeting young printmakers and painters. All interesting, and in an art school I always feel right at home. The smell of oil paint and printing inks - aaaah! Suddenly, though, I found myself in the back of a  very swish Mercedes driven (very fast) out of town, by the property developer, being taken off for an elaborate lunch with the artist Bai Ye, his friend the movie producer, another artist and my translator "Rocky". It was all quite surreal and I was having a lot of trouble working out why I was there. Did they think I was a potential investor? A wealthy art collector? A travel writer? Who knows - in China, I have become more adept at just 'going with the flow'. With the meal we drank green tea, Bai Jiu (the infamous Chinese 'white spirit', but thankfully not too much of it) and glasses of a very strange fortified port-like wine apparently made from the grapes grown on the property, which are not actually the right grapes for wine-making at all. Great food though. And friendly company, despite the meal's mysterious purpose and my slight anxiety that I might suddenly be presented with a time-share contract. Or the bill.

My translator told me many times over four days that Xi'an is an international city. This is wishful thinking. Despite the recent huge investment by Samsung, it is not so. The presence of foreign tourists is restricted to those ubiquitous warriors, in their 'theme park' and the few streets of the Muslim Quarter. I did not see a single western face anywhere else, and was stared at, pointed at and talked about everywhere I went. Small children kept running up and shouting "Hallooooo! Bye Bye!", as did middle-aged men showing off for their companions, which was less amusing. The weather in Xi'an was damp, foggy and extremely cold so I caught some kind of horrible virus and have been coughing, wheezing and sneezing feverishly for the last week.

I was very happy to be returning to Beijing, and looking forward to a quiet, peaceful 5 hours of reading and sleeping in a first class carriage. Alas, a large family embarked who, it  became clear, were already in the middle of a serious dispute. No sooner had they found their seats - all around mine, of course - than the younger of the four men began to shout at the eldest. They then began to punch each other, with all the other family members screaming, shouting, and ineffectually attempting to restrain them. The fight surged up and down the aisle of the entire carriage for the next 30 minutes, as the train left the station and the speed climbed to 280km per hour. The young train attendants in their snazzy purple uniforms attempted to reason with them to no avail. Everyone else shrugged and gave each other those quintessentially Chinese "what can you do?" expressions, which seem to mean "life is crazy, nothing to be done." This probably belongs in the same category as my experience last year when a naked man rampaged up and down the corridor of my (quite expensive) hotel, beating on doors and shouting. For hours. When I rang reception they said. "Oh dear, what we can do? He drink too much." On the train, the pair were  now throwing things at each other, each being held back by three or four people, and items of clothing and paper bags of McDonald's food were flying through the air, some landing on me. Eventually, the older man was led away under protest to sit in another carriage, and everyone else stood in the aisle loudly analysing what had happened for the next hour or so. A peaceful journey it was not.

I was so glad to arrive back to familiar Beijing, despite its grey air, where taxi drivers can usually understand my Chinese and people do not openly stare.

The next part of my "suddenness" was of course probably due to me being less than usually attentive, catching the subway to an unfamiliar part of town to meet an artist, and finding when I arrived that my wallet had been stolen en route. The shock of finding oneself in a foreign city with no cash, no ID and no immediate means of getting any cash is not to be underestimated, nor was my incredulity at finding that my Australian bank seems to think me capable of spending over $4000 at the quaintly named 'Friendship Store' while I was still actually on a train underground. Hence my visit to a police station to report the crime, in an effort to prove that I could not have been using my credit cards while I was reporting the theft of my wallet to station staff at Caofang Station.

This took more than three hours today. Three hours in a tiny subterranean room inside the Hujialou Subway Station with two police officers, drinking tea and wreathed in cigarette smoke and completing a tortuously detailed record of interview.They kindly told me my Chinese is quite good (it isn't!) and quizzed me at length about what I am doing in China. By this point I have to say I was beginning to wonder.  I was photographed front and side to compare with video footage from the subway, which no doubt made me look like a hardened criminal. My handbag has been measured and photographed. I have been described, unflatteringly, but certainly accurately, on the police record of interview as "not too tall, and not too slim." I have been presented with numerous Chinese documents, stamped with red stars, which could say anything. My reading ability is still on the level of "His sister's husband likes to eat noodles" so I would have no clue. I was then sent off to another police office - this one for foreigners - where I waited for a man who had gone to lunch. "Ta mashang lai" they said (he will return immediately.) It wasn't so 'mashang', and he returned only to tell me the office was closed, come again another day. Oh the tedium of it all.

The lustre of Beijing was gone, at least for 48 hours, and I felt miserable.

But today, after leaving the police station, the sky was a glorious blue. Last night's "da feng" (big wind) blew away the pollution. I restored my spirits with a visit to the museum of the Beijing Academy of Fine Arts, which has a collection of works by 20th century master Qi Baishi, and 4 floors of exhibition space with a focus on ink painting. Originally opened in 1957 by Zhou Enlai, it is now in a glamorous new building opposite Chaoyang Park and, as the brochure charmingly describes, "In the new era Beijing Fine Art Academy stepped into the third glory time." In the imperial past, the literati painted their gardens, and beautiful landscapes, in order to restore their souls and "bring comforts to their hearts” according to art historian Lin Ci, and an hour in the beautiful rooms with paintings of mountains, water, scholar rocks, bamboo, twisted trees, temples and tiny figures engaged in fishing, flying kites or observing nature, served to "bring comforts to my hearts” too.
My restorative museum visit was followed by coffee and pastry at Comptoirs de France and the purchase of those essential western food groups: cheese, good bread, ground coffee and chocolate; my equilibrium was somewhat restored and I could walk these mean streets once more without focusing too much on the dirt, dust and spitting.

And just for the record, my second-favourite Chinglish sign is to be found in public toilets. It says: "This is what I have been wanting to talk to you about. Please flush the toilet. You are the best."
Posted by An Art Teacher in China at 1:37 AM