Important works from the private collection of Gene and Brian Sherman are revealed to the public in Sydney in an exhibition across two spaces: 'Go East', curated by Suhanya Raffel at the venerable and slightly staid Art Gallery of New South Wales, and Yang Zhichao's monumental performance installation, 'Chinese Bible' at the Sherman Contemporary Art Foundation. The Shermans have given this work, and another significant installation by the Indian artist Jitish Kallat, to the museum. In comparison with the wonderful collection of contemporary art from Asia in the permanent collection of the Queensland Gallery of Modern Art, the holdings of AGNSW are rather woeful: it is to be hoped that these two very significant and generous gifts may kickstart a more dynamic acquisitions program that acknowledges the significance of Asian art, and our place within Asia.
My review of the exhibition, in which I was thrilled to encounter familiar works by Lin Tianmiao and Yin Xiuzhen, artists I have interviewed in China in the last two years, seeing them in a new light, was published today on The Art Life:

To title an exhibition of contemporary Asian art ‘Go East’ might seem deliberately provocative, given the geographical reality that Asia is not, in fact, to our east. It hints at Orientalism, at ‘Otherness’, at post-colonialism, as curator Suhanya Raffel acknowledges in her excellent catalogue essay. But it also acknowledges another reality: since the 1980s, despite many a political and diplomatic hiccup along the way, Australia has, in fact, turned to the metaphoric and cultural (if not the geographical) east.

The history of our engagement with contemporary art from Asia is filled with significant exhibitions, strong private and public collection programs, and cultural exchanges, of which ‘Go East’ is an important example. Since the Sherman Contemporary Art Foundation’s first commissioned project with Ai Weiwei in 2008, many of these discourses have been instigated by Gene Sherman. Through subsequent projects Australian audiences have been introduced to works by Chiharu Shiota, Charwei Tsai, Yang Fudong, Alfredo and Isabel Aquilizan andDinh Q. Le, to name just a few. ‘Go East’, an exhibition of works from the Gene and Brian Sherman collection at the Art Gallery of New South Wales, features these artists and others from China, India, Indonesia, Japan, the Philippines, Taiwan, Thailand, Tibet and Vietnam. It presents compelling evidence that an artistic ‘pivot to Asia’ will continue to enrich, provoke, and delight audiences.
Meanwhile, at the Sherman Contemporary Art Foundation in Paddington, Yang Zhichao’s ‘Chinese Bible’ fills the space recently vacated by Shaun Gladwell’s watery ‘Lacrima Chair.’ A sea of red, interspersed with flashes of blue, yellow and green, ‘Chinese Bible’ comprises three thousand personal notebooks and diaries collected by the artist in Beijing’s Panjiayuan ‘Dirt Market’, revealing a hidden history. Showing in tandem with ‘Go East’, the work represents the tsunami of change weathered by ordinary Chinese people over the fifty turbulent years from 1949 to 1999. Exhibitions, Gene Sherman told her audience at the opening of ‘Chinese Bible’, are “primary sites for the construction of art history. Exhibitions tell the story of art. They reveal untold or forgotten aspects of history - not just art history - and they shine the light on social injustices. Exhibitions are where artworks meet audiences.”
These humble notebooks and diaries, rescued from oblivion, washed and presented as found objects, are filled with self-criticisms, transcribed passages of compulsory ‘Mao Zedong Thought’, mechanical diagrams, even (forbidden) personal reflections, poetry, knitting patterns and recipes. Laid out in symmetrical rows on a raised platform, the almost uniform red of their covers presents an allusion to the modernist grid – another kind of failed utopian vision. Their cover designs reflect periods of recent history, with pictures of animals, temples, traditionally costumed characters, and dancers disappearing in the years of collective madness between 1966 and 1976, when the Cultural Revolution made every element of an individual’s dreams, desires or memories suspect and taboo. Those covers are plain red, or adorned with images of Mao. 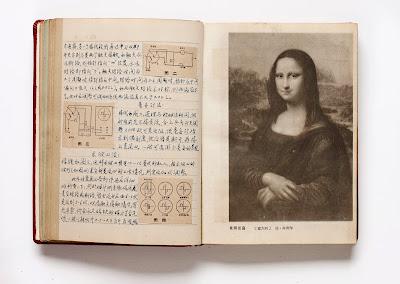 Better known for provocative performance works involving bodily mutilation and even surgery (most notably having tufts of grass from his home province surgically implanted in his back) Yang has found a new calm and quietness. Like other transgressive artists of the period such as Zhang Huan (whose ‘Sydney Buddha’ featured at Carriageworks over the summer) Yang Zhichao appears to be reflecting on his own and China’s history. I asked the artist about this change in his practice. “It relates to the introduction of performance art into China – in 1989 it was a very new thing, and was introduced into China from outside,” he said. “From 1995 to 2005 it was kind of a ‘golden age’ of Chinese performance art - it was an art form that put the artist in opposition to a variety of things: to society in general, to living conditions, to governmental regulations, and of course to the artworld itself. It was such a meaningful practice. In the period 2005 – 2015 there has been significant change in China that has also contributed to a change in art practice. Looking back over the last ten years… in general it has changed to a less confrontational mode.” And, he added, somewhat ruefully, “Also, artists have aged!”
To read more, click HERE.

Posted by An Art Teacher in China at 3:10 AM