I cannot believe that March is nearly over and this was Day 17 of my 'big adventure'.

I am exhausted after a huge first day in Shanghai, starting out at 7.00am with a long taxi ride over 'Jetsons' style futuristic elevated freeways across the river to Pudong New Area, and the government's showpiece Number 2 High School, attached to the East China Normal University. This was really fascinating, but certainly not a typical Chinese high school. Firstly, it is extremely difficult to get into, and the students are academically selected. Secondly, it has a strong international program, with sister schools in Canada, the United States, the UK - and Geelong, Victoria. International students come on exchange programs to the school, so dialogue is far more open than in a traditional Chinese school. The campus is large, modern and very impressive. 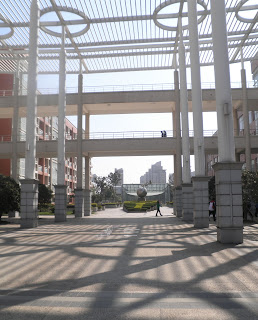 I am invited to watch Mr Liang's 11th grade art class learning about the traditions of Chinese calligraphy. Mr Liang is a young teacher, but he manages his class of 40 students effortlessly, using humour and his strong presence to ensure that they are engaged and actively involved in his lesson. He is also being watched (and videotaped) by the school Principal for his annual review, as well as being observed by me, my translator, and 2 other visitors from another Chinese school. None of this seems to make him nervous, and his class of 16 and 17 year old students obviously respect him and enjoy his lesson - and they all clap when he demonstrates the technique of brush calligraphy.


Mr Liang begins his lesson by asking students to identify Chinese national treasures, and there is laughter as they name Mahjong and Chinese Opera.  He uses an interactive whiteboard effectively (but not interactively, which would be difficult with a class of this size) to show examples of the development of the art of calligraphy from the earliest bone oracle carvings, through Qin dynasty stone carvings, the bamboo strips used before the invention of paper and the Han Dynasty script, through to cursive script which is expressive, conveying the emotions of the writer to the audience. At various points the students are asked to discuss questions he has raised, and then they stand to respond very politely to his questions.


When the students begin to write the 2 characters he has identified, using beautiful bamboo brushes and black ink from blue and white patterned jars, there is some giggling amongst the girls and a bit of pushing and shoving amongst the boys - all very normal. They are curious about my presence, and some are very keen to be photographed (no different than Loreto girls in that regard!) At this school, students in 10th and 11th grades all study art - but they have only one 40 minute lesson per week, in a class of 40 students. Some students elect to study a more intensive course, however no student is able to study art in 12th grade as it is not a subject for the Central Examinations.

After the class Mr Liang and I have an interesting discussion about the nature of the art curriculum in China, and about his interest in the use of ICT to support student learning.  While Mr Liang is a highly competent and skilful teacher, and is himself a practising artist, there appears to be something of a disconnect between the art taught in the school system (about 50% Chinese and 50% Western) and what is actually happening in the art world. He tells me they are reluctant to accept contemporary art as 'real art' and he is unsure about the value of 'pushing the boundaries' with them. Of 18 lessons given to one class last semester, he estimates he would have used examples of contemporary art in two of them. Students at No 2 High School are clearly very competent painters, and accomplished in the traditions of drawing. There are many paintings on display which reveal the influence of Impressionism and Post-Impressionism which show a considerable degree of skill.

Mr Liang is interested to find out about the NSW Visual Arts curriculum, and we note a number of the key differences between our two systems. We agree, however, that art teachers will always find a shared understanding and common ground as we are constantly advocating for the legitimacy of our subject in the curriculum! Shanghai schools are rigorous, and perform the best of any school district in China in national and international testing. There is currently much controversy and public debate about this, I have read, as some parents begin to question whether students are actually being taught how to think for themselves, or merely how to learn in a very narrow and rigid way. Students suffer a great deal of anxiety, stress and depression as a result of the high pressure, high stakes testing to which they are subjected. Every young Chinese person I have spoken to has made some reference, either veiled or specific, to the notion of trying to 'bring honour to their family' through their academic achievement and future career.

A focus on literacy and numeracy to the exclusion of other areas of the curriculum (as happened in the US with the Bush 'no child left behind' program) forces the arts into a shadowy zone of 'optional' or 'non-core' knowledge which can be dropped entirely when political/economic agendas change. At considerable cost, I would argue.

A snippet from the Shanghai Daily - a Middle School teacher in Guangzhou has been fined after slapping a child who dared to argue that his homework regime was unreasonable. He has been forced to apologise to the child and parents - a very grave loss of face.

The afternoon was spent at the Zendai 'Art Supermarket' and then with the young Canadian director of 'Art Labour' Gallery - a fascinating 2 hours which resulted in some more artist interviews and a most interesting discussion of whether the current western fascination with Chinese art was really a kind of fetishisation, a new version of postcolonial 'Orientalism', in which a certain type of 'chinoiserie' is privileged at the expense of other, more authentic kinds of artistic expression. Something to really think about ... am I guilty of this romantic notion of Chinese art as somehow 'other' also? Martin says he thinks Australians are much less likely to fall into this trap than are Europeans, as we seem to have a more secure sense of China's location, significance, and our own place in the Asia Pacific region as well.  We agreed that currently the Chinese artworld seems to be in a transitional phase where it will emerge as something different, stronger and just as fascinating. More about this, and more thoughts about what I have seen and experienced in my 11 days in Beijing, later.
Posted by An Art Teacher in China at 3:40 PM